A Catholic Group Questions a Public Catholic Funeral for Kennedy 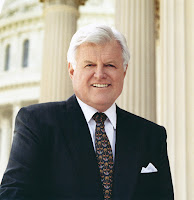 Thomas Euteneuer, president of Human Life International, released this statement concerning Senator Kennedy. "We must, as a matter of precept, pray for the salvation of heretical Catholics like Senator Edward Kennedy, but we do not have to praise him, let alone extol him with the full honors of a public Catholic funeral and all the adulation that attends such an event."

He adds that while Senator Kennedy called himself Catholic, like Speaker of the House Nancy Pelosi and Vice President Joe Biden, they are actually wolves in sheep's clothing. "They do not hold to the teaching of the church. They, in fact, take every opportunity seemingly to contradict the teaching of our church," Euteneuer says. "So in the case of Senator Edward Kennedy, he was not only against his church's teaching on the issue of abortion, but the same with embryonic stem cell research, the same with gay marriage and various other issues which set him in diametric opposition to his church's very well-defined and clearly articulated teaching."

Euteneuer says he is speaking out now to remind everyone that Catholics cannot honor a person with a full and public Catholic funeral when, like Senator Kennedy, he really was not.