Why People Leave the Church 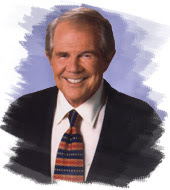 Charismatic televangelist Pat Robertson plans to retire as president of the university he founded, according to an announcement Tuesday.

Robertson informed Regent University’s Board of Trustees that he plans to retire effective July 1, 2010, but that he will continue to serve as the university’s chancellor and member of the board.

"Serving as Regent University's president has been an honor and a joy," said Robertson, who also had a hand in the founding of several other organizations , including the American Center for Law and Justice (ACLJ), the Christian Broadcasting Network (CBN), and the Christian Coalition.

"The accomplishments of our faculty, staff, students and alumni are truly remarkable and I am so delighted by the achievements of our rapidly growing school,” he added. “As chancellor and a trustee, I will now focus on helping guide the university toward the next level of strategic growth and the implementation of our master plan."

Robertson’s announcement comes as more leaders from his generation are stepping down or stepping aside and making room for the next generation to step in and step up.

In February, conservative evangelical leader James Dobson resigned as chairman of Focus on the Family, and just this month, the historic megachurch of the late D. James Kennedy installed the Rev. Tullian Tchividjian as its second minister in five decades.

Robertson, furthermore, had already announced in 2007 that he was passing on his duties as chief executive officer of the Christian Broadcasting Network to his son, Gordon.

"It was important to pass down the line especially to somebody a little bit more adept at figuring out the new technologies coming at such a bewildering speed to all of us," Robertson had said. According to the announcement Tuesday, Regent’s Board of Trustees has appointed a search committee that will name a new president, who is expected to join the university no later than fall 2010.

Amid the search, Robertson will oversee a new campus master plan that he developed for Regent, with specific attention to the continued growth of the university's undergraduate and graduate online and on-campus programs, and the university's overall global impact.

"Our mission remains steadfast: to train Christian leaders who serve with excellence in every area of their lives. I have seen that excellence firsthand and I know that we have only just begun to see the fruits of our labor," he said.

Robertson founded Regent in 1978 and became its sixth president in 2000. In 2008, the Chronicle of Higher Education's survey of Great Colleges to Work For ranked Regent among the top five small colleges to work for in several categories.

“When you create something great you will create conflict.” – G Kawasaki

As some of you have figured out by now, I serve on the Church of God of Prophecy Corporate Board of Directors (Administrative Committee). As a pastor consultant, I attempt to represent pastors. I am always open to input from pastors everywhere.

Some of the business conducted is confidential out of necessity. But, for some time now we have been discussing the launch of a web page at http://www.cogop.org/ to announce news and actions of the Board. I have been waiting for the launch of that page to talk about the business being conducted, but I do feel at liberty to share the following information which is already public knowledge.

2. The Leadership Development Institute was a great success, with people from all over the United States and many of the nations of the world in attendance. Although Tennessee had the largest registered attendance, I am certain we can have a better representation for future events like this one.

3. International Assembly Committees have been in town (Finance and Stewardship, Bible Doctrine and Polity Committee, Administrative Committee) for meetings, as have the General Presbyters from around the world.

4. Work is still underway on our project at Fields of the Wood to upgrade the pavilion, and we are anticipating completion/and a dedication service of the newly upgraded site, and will invite all of you to join us for a dedication of the pavilion.

5. The new fiscal year is just around the corner (June 1, 2009) and everyone is looking forward to anticipated projections as our church continues to grow, now at over 1.4 million members.

Finally, I want to remind you that you are a part of something much greater than the local area where you serve. You are a part of a great team of ministers and laity dedicated to prayer, leadership development and the harvest, and I am humbled to be a part of such a great leadership team! God bless you!
[Some verbage by Bishop E.C. McKinley]
Posted by Don G. Brock at 9:11 PM No comments: