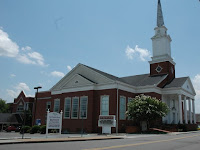 Lee University has announced the acquisition of the adjacent First Baptist Church of Cleveland, TN property.
First Baptist, one of the largest and most historic congregations in Cleveland, Tennessee, is in the latter stages of Phase One of a multi-million dollar property relocation approximately five miles to the north on Stuart Road in Cleveland.
In an e-mail to the faculty and staff on Sunday, Lee president Dr. Paul Conn said the university has, “purchased all the downtown Cleveland property of First Baptist Church. The purchase was approved by our Board of Directors in a unanimous vote on Friday (June 11), and announced to the First Baptist congregation by Pastor Allan Lockerman in this morning’s worship services.”
Conn went on to say that two years ago, First Baptist began construction of a new facility and during that process the two parties have engaged in conversations which culminated in this weekend’s final outcome. The church is scheduled to move from its downtown location to its new building in September.
The property purchased includes the main sanctuary, which seats approximately 1,000, and a large education building which together total more than 95,000 square feet. The purchase also includes parking lots, a one story 35,000 square foot block of former commercial property on Ocoee Street which years ago housed a JC Penney store, and 13 parcels in the neighborhood between the church and the Lee campus. As part of the agreement, First Baptist will maintain its offices in the commercial building during the next two years while the Stuart Road facilities are expanded.
“Our decision to buy the First Baptist property is an expression of our confidence in the Lord’s plans for our future,” Conn said. “The opportunities which it will create are exciting to consider.”
The relationship between Lee University and First Baptist was characterized by Conn as one of “wonderful neighbors for many years ... we will miss their presence on our southern border, as they move from the downtown community. We have enjoyed sharing the neighborhood with them. But as the Lord leads them to their new home, we believe it is natural and fitting that we should utilize this key piece of property in ways that continue to serve the Kingdom of God.”
[Faith News Network]
Posted by Don G. Brock at 3:46 PM No comments:

The Church of God of Prophecy International Offices announced the reopening of its Communications Department, a move intended to streamline and unite all divisions of its communications (print, media and online) into one centralized department.
As part of the restructuring, Shaun McKinley, was named director of communications, a position he will assume while continuing to serve as administrative liaison to the general overseer.
McKinley, a communications graduate of Montana State University, brings over a decade of experience to the department having worked in both the religious and nonprofit sectors in the areas of marketing and development.
DeWayne Hamby was also named publications coordinator and in August will assume the position of managing editor for the White Wing Messenger, the denomination’s magazine now in its 86th year of printing.
Hamby, a graduate of Lee University, recently returned to the International Offices after serving as assistant editor of Christian Retailing magazine for Strang Communications in Lake Mary, Fla.
As publications coordinator, Hamby will supervise the production and editing of the multiple versions of the denominations magazines, as well as the International Offices Art Department.
Kirk Rising was named media coordinator, overseeing the video production needs of the International Offices and providing assistance with the web design needs of the organization and its various ministries.
“We are excited to finally bring all of our communications efforts under one umbrella,” said McKinley. “In doing so, we are presented with greater opportunities for collaboration among our most creative minds and believe this will add greater impact to all of our communications efforts.
“This move will streamline all of our communications channels, from our printed magazine to our website, to our connections through social networking and blogging, so that what’s being communicated is consistent to our various audiences. It’s an exciting time in our world and we intend to use every resource available to communicate our message to the members and friends of the Church of God of Prophecy.”
[The Cleveland Daily Banner]
Posted by Don G. Brock at 11:10 AM No comments: 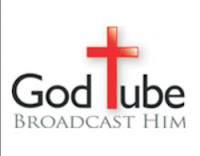 The Salem Web Network has completed its acquisition of Christian video-sharing website GodTube.com and social networking site Tangle.com, according to a representative for the network.
The two new additions will add more weight to Salem’s already lengthy portfolio of faith and family-themed content sites, including Crosswalk.com, Christianity.com, OnePlace.com and CrossDaily.com, among others.
“Both of these brands have pioneered new content and community interaction in the faith-based market and give Salem a strong presence in the rapidly growing web 2.0 video and social networking space,” commented Salem Web Network Senior Vice President Tom Perrault. “We are excited about adding these sites and combined audience to our network, and we have plans to aggressively grow both over the next several years.”
Salem’s announcement comes less than two months after GodTube.com officially reopened, having been gone since turning over to a new name and URL, Tangle.com, about a year ago.
With Tangle.com having developed into a social networking site over the past year, GodTube was able to be reborn – a move that makes sense considering the site’s fast growth in the first two years after its initial launch in 2007. GodTube.com reportedly reached 2.7 million users monthly before turning over to its new URL.
"There is a great amount of brand loyalty to GodTube.com from the visitors to the site,” said Trey Bowles, CEO of Big Jump Media, parent company of both GodTube.com and Tangle.com.
“And we plan to grow the site offering and continue to provide a place online for Christians to come find, view and share encouraging and inspirational content across the Internet," he added after GodTube.com’s resurrection.
Regarding Salem’s recent purchase of GodTube and Tangle, Rick Killingsworth, the network’s Executive Vice President of New Media, said the sites would fill a significant gap in the network’s content offerings – that is, professionally produce and user-generated videos.
“This acquisition gives us the leadership position overnight, while also opening up significant new multi-media advertising opportunities,” he commented.
Presently, GodTube.com and Tangle.com reach over 2 million visitors a month, with millions of page views, and maintains over 800,000 registered users. The sites provide a place for Christians to connect, watch and share videos, access the top singers in Christian music, read the Bible online through the Online Bible, and upload prayers to the Prayer Wall and network with friends.
[By Kevin P. Donovan|Christian Post Reporter]
Posted by Don G. Brock at 10:59 AM No comments: