YuleLog4aCause.org from The Chapel on Vimeo. 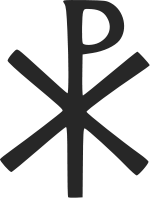 Does "Xmas" take Christ out of Christmas?
Some people erroneously believe that the term Xmas was devised as part of an effort to “take Christ out of Christmas” or to literally “cross out Christ;” it is seen as evidence of the secularization of Christmas, as a symptom of the commercialization of the holiday (as the abbreviation has long been used by retailers).
Actually, the word “Christ” and its compounds, including “Christmas,” have been abbreviated in English for at least the past 1,000 years, long before the modern “Xmas” was commonly used. “Christ” was often written as “XP” or “Xt;” there are references in the Anglo-Saxon Chronicle as far back as AD 1021. This X and P arose as the uppercase forms of the Greek letters X and P used in ancient abbreviations for Xpiotoc (Greek for “Christ”), and are still widely seen in many Eastern Orthodox icons depicting Jesus Christ. The labarum, an amalgamation of the two Greek letters rendered as XP, is a symbol often used to represent Christ in Catholic, Protestant, and Orthodox Christian Churches.
The labarum, often called the Chi-Rho, is a Christian symbol representing Christ. The occasionally held belief that the “X” represents the cross on which Christ was crucified also has no basis in fact. Saint Andrew’s Cross is X-shaped, but Christ’s cross was probably shaped like a T or a †. Indeed, X-as-chi was associated with Christ long before X-as-cross could be, since the cross as a Christian symbol developed later. (The Greek letter Chi X stood for “Christ” in the ancient Greek acrostic IXOYE ichthys.) While some see the spelling of Christmas as Xmas a threat, others see it as a way to honor the martyrs. The use of X as an abbreviation for “cross” in modern abbreviated writing (e.g. “King’s X” for “King’s Cross”) may have reinforced this assumption.
In ancient Christian art, X and XP are abbreviations for Christ’s name. In many manuscripts of the New Testament and icons, X is an abbreviation for Christos, as is XC (the first and last letters in Greek, using the lunate sigma); compare IC for Jesus in Greek.
Posted by Don G. Brock at 12:49 PM No comments: