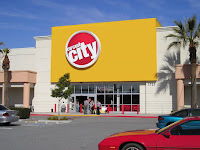 What has happened to the 250 Circuit City stores that have closed? Many churches are seeing some great opportunities in these abandoned stores and other run down theatres and strip malls.

Read this from the Orlando Sentinel: "There are 250 Circuit City stores that have gone dark," said Matthew D. Messier, who specializes in faith-based and nonprofit real estate for CNL Specialty Real Estate Services in Orlando. "Through 'adaptive reuse,' churches have stepped in. ... Because of what's happened with the economy, there are more options for churches now."

The International Council of Shopping Centers has no data to support the trend but said it's apparent throughout the country. "Vacancy rates are high, and they need to fill those spaces," said Erin Hershkowitz, a spokeswoman for the industry group. "If it's a big box, like a Circuit City, that's a perfect venue for a church."

During boom times, commercial landlords rarely wooed churches. Houses of worship typically draw parishioners the one day of the week when neighboring stores are closed and cannot benefit from the foot traffic. Upstart churches have been leasing empty storefronts for years, though they tend to move on when they outgrow the space or can afford more-attractive quarters. But shopping centers are now filled with For Lease posters. And unconventional space in high-traffic retail settings has become so attractive to some churches that they are leaving their old sanctuaries for trendier digs.

The Rev. Byron Bledsoe, former pastor of Parkway Baptist Church in east Orange, recalls getting national recognition years ago from the Southern Baptist Theological Seminary for baptizing new members. But on the flight home from the awards ceremony in Kentucky, Bledsoe said, he knew the church could do a better job of attracting newcomers to Christianity rather than "rechurching" members from other congregations. So he helped lead an effort to transform the church. It was renamed C3 Church, which stands for Connecting the Community with Christ. It renovated its fellowship hall and soon began attracting newcomers. But Parkway's steepled sanctuary still did not convey the image of a church dynamic enough to draw potential converts to the faith. "We knew early on that our facilities were a hindrance to what we were trying to accomplish," Bledsoe said. "We had a ton of resources locked up in bricks and mortar."

Working through Messier and Nicholas A. McKinney at CNL, the church in 2007 sold its buildings and 20 acres on Lake Underhill Road for $8million to Eastland Baptist Church, which had lost its property to an interchange expansion at State Road 436 and Colonial Drive. C3 Church now leases space for its sanctuary from Regal Cinemas in Waterford Lakes Town Center. Its offices are in a three-car garage at Bledsoe's home.