Frank Edward Howard, age 90, a resident of Cleveland, TN passed away peacefully at his home Tuesday, April 1, 2008. Mr. Howard was born in Stratford, Iowa on October 23, 1917 and he was the son of the late Jenny Belle Lynch Howard and Wilbert O. Howard. His sister and five brothers also preceded him in death. He later served in the United States Army during World War II, in the 121st Hospital Division. Mr. Howard moved to Wyoming after his marriage to Elva Decker, where they co-pastored the Sheridan Church of God of Prophecy for eight years. It was in Wyoming Mr. Howard attended Hieman Business College, preparing him for his role as the accountant for the White Wing Publishing House here in Cleveland from 1958 until his retirement in 1984, serving 28 years.

During his 50 year residency in Cleveland, Mr. Howard ministered as a deacon at the Peerless Road Church of God of Prophecy, as well as serving in leadership positions such as treasurer, Sunday School superintendent, and small group ministry leader. He also supported his wife’s international ministry to women, traveling with her to every continent. He was a loving husband, father and grandfather. He lived his life as a testimony of God’s faithfulness. His humble spirit, tender heart and love for the Lord defined his character and inspired those around him.

Mr. Howard’s compassion for the lost prompted a life dedicated to personal evangelism and serving others. Above all, his family and friends will remember him as a man of prayer, who lived out his faith daily looking forward to the time that he would join the saints in heaven’s eternal celebration.

Survivors include his loving wife of 58 years, Elva Howard of Cleveland, his daughter, Kathryn Creasy and her husband Rick, his son, The Reverend Randy Howard (General Overseer of the Church of God of Prophecy) and his wife Bess, his grandchildren, Lee and Clint Creasy, Lauren Harding and her husband Jay and Ben and Brett Howard.

The Remembrance of Life Service will be conducted Saturday morning at 11:00 from the Peerless Road Church of God of Prophecy with Pastor Tim Coulter and Reverend Billy Wilson officiating.

The family will receive friends from 6 until 9 P. M. Friday at the Peerless Road Church of God of Prophecy.

With hands lifted high in praise, and lots of "Amens," it was indeed a celebration of faith and hope.

"We're looking forward to this as a means of serving our community in a new way," said Daily Record editor and publisher Bart Adams. "While we already publish more church news than most any newspaper our size, 'Faith & Hope' will be a Christian outreach to people who aren't looking at our church pages to find a service or activity.

"This is a way for business and church to come together in a bold way and say Jesus is Lord," Mr. Crawley said. "With your prayers, your support and your participation there will be revival, not just in Harnett County, but across eastern North Carolina."

Mr. Crawley also discussed the online aspect of the magazine, the Web site http://www.faithandhopeonline.com/, which will feature its stories, testimonies, links to churches and local resources, and a directory of area churches. Partnering churches receive an enhanced listing on the site, and a link to their own church site. Local churches will also be able to upload their news and pictures.

The Rev. Frank Taylor of Coats, pastor of the Church of God of Prophecy, said he's excited about being part of the magazine. "It's excellent, and I think the idea will be a great success," Rev. Taylor said. "It's something the churches have wanted to do for years - the book will bring us together as a ministry."

On April 3, Judge Randy Bellows of the Fairfax County Circuit Court ruled in favor of the Virginia churches that have departed the Episcopal Diocese of Virginia. Bellows ruled that a religious division had occurred, and that the Virginia Statute on Religious Division, Va. Code 57-9(A), is applicable to this case. The Episcopal Church and the diocese are expected to challenge the court's decision. Bellows has scheduled arguments on the constitutionality of the Virginia statute for May 28.

A majority of members in the 11 Anglican churches voted to sever their ties to the Episcopal Church and the diocese following disputes over the redefinition and reinterpretation of Scripture.

"And it's ironic and tragic when a secular judge takes the Episcopal Church's membership in the Anglican Communion more seriously than the denomination itself. Bellows rightly recognizes that 'the CANA [c] ongregations were bound by personal ties of 'affection or sympathy' with the Anglican Communion' both before and after they left the Episcopal Church.

"The ruling should cause the Episcopal Church to take a long look at its harsh, take-no-prisoners approach to dealing with church property. This result was by no means inevitable. The denomination should have allowed the diocese to sit down at the table with the CANA congregations.

"Sadly, the Episcopal Church appears more interested in property than people, and more interested in the recovery of property than in reconciliation. Christians certainly can legitimately differ in their conclusions about who lawfully should possess the property. But sometimes you can be overly zealous concerning some goal that you'll either never reach or will attain at too great a cost.

"Will the Episcopal Church gain the world but lose its soul in the process? It still is not too late to pursue healing and reconciliation." 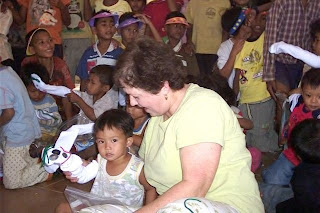 Plans are underway for a memorial to honor Dan Howell's wife, Carol. After Dan consulted with Fred Garmon, Executive Director of People for Care and Learning, he and the family settled on what they believe is a fitting permanent memorial for Carol in Cambodia.

Dan stated: “As you know, Carol fell in love with the Cambodian children, especially the ‘garbage dump’ kids in Phnom Penh. PCL has recently completed a new facility called ‘Emmanuel Village.’ Its purpose is to rescue these children from the garbage dump. However, the facility does not have a place for the children to play. Since play is an essential part of childhood and since Carol had such a lively and playful spirit, we thought it fitting to build the ‘Carol Howell Memorial Playground.’ It will be a safe place where children’s laughter is heard and their lives are mentored for Christ. As you know, Carol had an infectious laugh, and I know she would be thrilled to see the joy this playground provides for laughing children.”

“Her desire was to return to Cambodia next January. Through this memorial and a marker to display her name, she will always be with them. All contributions to this memorial will be appreciated by her family.” Tax deductible checks can be made out to Keith Street Ministries, 4000 Keith Street, Cleveland, TN 37312 and marked for the “Carol Howell Memorial.”