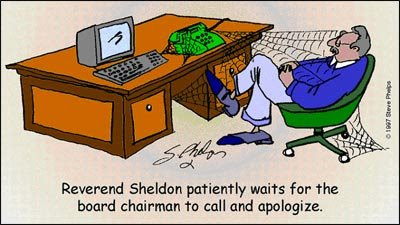 Make It About Mission, Not About the Machine

Lately, news headlines have been dominated by the debate over a potential bailout of the American automakers. The economic recession has dented the sales of new vehicles, which has thinned the pocketbooks of auto manufacturers. Already in a precarious position due to past instances of mismanagement, Detroit's Big Three find themselves approaching a cash flow crisis.

Heated discussion continues on what, if any, action should be taken by the government to rescue the automakers. The purpose of this article isn't to argue for or against a bailout, but rather to point out the leadership lessons that have surfaced during the debate. Amid the bailout talks, three maxims standout as worthy of note, namely:

- Wealth Makes Waste, Fight to Stay Lean
- Once Broken, Trust Must Be Restored at a Premium
- During Downturns, Leaders Model the Way of Frugality

[by Justin Pinkerman]
Posted by Don G. Brock at 9:24 PM No comments:

A Life That Counts

Ben Franklin once wrote, "I would rather have it said 'he lived usefully' than 'he died rich.'" More than just words, it was the way Franklin lived his life. One example of his useful nature was the invention of the Franklin stove. Instead of patenting it and keeping it to himself, Ben Franklin decided to share his invention with the world.

According to Dr. John C. Van Horne, Library Company of Philadelphia: "Franklin's philanthropy was of a collective nature. His sense of benevolence came by aiding his fellow human beings and by doing good to society. In fact, in one sense, Franklin's philanthropy, his sense of benevolence, was his religion. Doing good to mankind was, in his understanding, divine." Even his position as a printer fit this philosophical bent. He did not hoard his ideas, but shared them, and everyone benefited. He had an "abundance mentality."
Instead of seeing the world in terms of how much money he could make, Franklin saw the world in terms of how many people he could help. To Benjamin Franklin, being useful was its own reward.

As I age, I gain perspective on the illusion of wealth and status as forms of fulfillment. I don't want my life to be measured by dollars and cents, or the number of books I've authored. Rather, I want to be remembered by the lives that I've touched. I want live a life that counts. With each day that passes, I feel a greater sense of urgency to make sure my time and energy are invested in developing leaders.