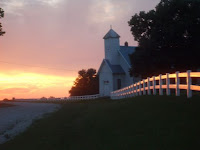 The results of a new survey released this week show that half of American adults have changed religious affiliation at least once during their lives.

The results also reveal that:
To read the full report, which includes analysis of why people change churches or leave the faith, CLICK HERE.
Posted by Don G. Brock at 10:39 AM No comments:

"We don't go running away from our values. We go drifting away, and one day wake-up in a place we never meant to be, drifting in a direction we would have never chosen." - John Blumberg