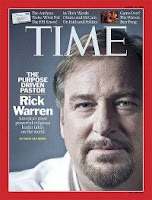 Pastor Rick Warren is on the cover of Time magazine this week along with a full cover story on him.

Here's one opening paragraph from the article: "If Warren is not quite today's Graham, who presided as 'America's pastor' back when the U.S. affected a kind of Protestant civil religion, he is unquestionably the U.S.'s most influential and highest-profile churchman. He is a natural leader, a pathological schmoozer, insatiably curious and often the smartest person in the room. Like Graham, he projects an authenticity that has helped him forge an exquisite set of political connections — in the White House, on both sides of the legislative aisle and abroad. And he is both leading and riding the newest wave of change in the Evangelical community: an expansion beyond social conservatism to causes such as battling poverty, opposing torture and combating global warming. The movement has loosened the hold of religious-right leaders on ordinary Evangelicals and created an opportunity for Warren, who has lent his prominent voice to many of the new concerns. "

Rick Warren has broken many barriers and introduced much change to the American (and worldwide) church; and has done so, for the most part, very graciously. Whether you’re a Rick fan, or one of his self-proclaimed enemies, you’ll want to read this article.
Posted by Don G. Brock at 11:17 AM No comments: