A pro-family leader and former military officer is very concerned about the future of the U.S. military Chaplain Corps if President Obama is successful in ending the ban on homosexuals serving in the military.
Tony Perkins of the Family Research Council (FRC) had been invited to speak at the National Prayer Luncheon at Andrews Air Force Base on February 25. But because he had spoken out forcefully against President Obama's desire to repeal the 1993 law which bans homosexuals from military service, his invitation to speak at the event was cancelled.
Perkins, who is an ordained minister as well as a Marine Corps veteran, had planned to give a devotional message -- not a political one. He says what happened to him should serve as a warning to those who would dare oppose Obama's agenda, particularly military chaplains who espouse a biblical worldview.
"[The Chaplain Corps is] very concerned about this policy in that if it does go through and the military is forced to embrace homosexuality, that there will be a mass exodus of chaplains," contends Perkins. "And quite likely because chaplains have to be sponsored by an association or denomination, that those who have an orthodox view on Christianity and scripture would be disqualified from sponsoring chaplains."
So Perkins says in essence the military would become void of Bible-believing, Bible-preaching, Bible-counseling chaplains.
[by Chad Groening - OneNewsNow]
Posted by Don G. Brock at 11:45 PM No comments: 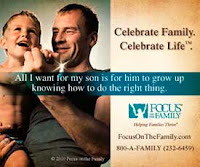 Jehmu Greene and the Women's Media Center are the most insensitive, anti-Christian, rude people I have seen in a very long time. I am appalled that they want all Christian rights taken away in the U.S., a country founded on freedom and Christian principles.

They are a so-called progressive, secular, movement who wants to stamp out everyone's rights but theirs.

They are behind the NCAA decision to pull a Focus on the Family innocent ad, claiming that college athletes find the ad objectionable. What? What is there in the ad on the right that any human being would find objectionable?