Hindu extremist groups are offering money, food and alcohol to anyone who murders Christians and destroys their homes.

The violence is nothing new in Orissa, India, where India's Communist Party estimates that more than 500 Christians have been killed by Hindu mobs in Orissa since late August, 12 times more than official government claims of only 40 homicides.

But now the stakes are even higher - and pastors have a bounty on their heads.

- Prays as much, or more, publicly than privately.
- Is almost exclusively dependent on others’ sermons to preach than directly hearing from God.
- Cares more about his church than The Church.
- Preaches about evangelism but doesn’t practice evangelism privately.
- Tolerates and rationalizes unconfessed sin.
- Preaches for the approval of people rather than the approval of God.
- Is overly sensitive to criticism.
- Harbors bitterness and unforgiveness.
- Reads the Bible to prepare sermons but not for personal devotion to God.
- Is jealous or critical of someone else that God is blessing.

What am I forgetting? Do you see any of this in yourself?

[from LifeChurch.tv : swerve by Craig Groeschel]
Posted by Don G. Brock at 12:53 PM No comments:

Performance Feedback in the Church

Performance feedback is the on-going process between employee and manager where information is exchanged concerning the performance expected and the performance exhibited. It seems in the church arena, either the chaos that sometimes surrounds the church environment or the inexperience to be able to effectively deal with tough employee scenarios pose particular struggles.

Constructive feedback can praise good performance or correct poor performance and should always be tied to the performance standards. Let’s look at a list of characteristics of providing the various types of feedback.

Constructive feedback is:
1. Specific rather than general. To be told that one is “dominating” will not be as useful as being told that, “In the meeting that just took place,
- you switched topics without asking if there were additional comments,
- you cut people off mid-sentence, and
- you interrupted others.”
2. Focused on behavior rather than on the person. It is important that we refer to what a person does. Thus we might describe a person as having “talked more than anyone else in this meeting” rather than saying the person is “a loudmouth.” The former allows for the possibility of change; the latter implies a fixed personality trait.
3. Given in order to help, not hurt. Too often people give feedback to make themselves feel better.
4. Directed toward behavior which the receiver can do something about. It is pointless and frustrating to be reminded of a trait over which one has no control.
5. Well-timed. Feedback is most useful at the earliest opportunity after the behavior you want to address has been demonstrated (depending on the person’s readiness to hear it, privacy, time available for discussion, etc). Feedback presented at an inappropriate time may do more harm than good.
6. Limited to the amount of information the receiver can use rather than the amount you would like to give. To overload a person reduces the possibility that the feedback will be used. Additionally, if you give more information than can be used you are likely satisfying some individual need rather than attempting to help the other person.
7. Checked for clarity. Ask the receiver to rephrase the feedback received to verify that it corresponds to what you had in mind. No matter what the intent, feedback is often perceived as threatening thus subject to considerable distortion or misinterpretation.
8. Followed up on at a later date. Be aware of the effects of your feedback.

Just as a reminder, it is always good to have a plan when going into this type of situation. There are three major steps to consider when providing any type of feedback to an employee on their performance:
1. Be prepared
2. Have it written
3. Be Direct
4. Be Fair
5. Be honest

[from Christian Church Development by wtrentcotton]
Posted by Don G. Brock at 12:16 PM No comments:

“If you are bored with life, if you don’t get up every morning with a burning desire to do things - you don’t have enough goals.” — Lou Holtz

What should the leader do?

I must confess. I struggle when I see some churches of moderate size and growth with pastors who are doing everything for everyone. Sometimes, when someone is called into ministry (speaking from experience), we tend to think that Christ has uniquely called us to be everyone’s helper, teacher, prayer partner, and shepherd, all at the same time. Granted, in smaller churches or churches in the early stage of the life cycle, this is a necessary trait to have.

Unfortunately, as the church size and mission grows, it is hard for some of the pastors to grow out of that mind set. It is in this transitional time period that pastors are to transition more into the shepherd than a simple herdsman.

Jeremiah 3:15 is a great example of what a pastor should ultimately work toward. It does not say, “And I will give you pastors according to mine heart, which shall administrate you, take care of the church finances, run from board meeting to board meeting, etc.” It has become an epidemic in some churches for pastors to run from one meeting to the next, schedule time to minister to those in the hospital, cut the grass, and by the way, schedule some time to work on the sermon series for this coming Sunday. Granted, there are pastors out there who put the message first, but I am not talking about them. I am talking about the pastors who are so busy with church life, they forget the main objective for this role is to feed the flock. I find it no coincidence that Jeremiah 3:15 states God will “shall feed” the flock and the answer Christ gives Peter after the reseurrection is the “feed my flock.” (John 21:15) So if the primary and daresay, most important role of the pastor is to feed, why then, does the feeding duty usually come at the end of list?

Thus, we must explore the option of establishing an Executive Pastor, or if you were to use business terms, a COO. What is the role of the Executive Pastor? Quite simply, the Executive Pastor is the day to day manager of the ministries for the church and anything else that is needed to be overseen to allow the Pastor to spend time in prayer, discernment and preparation for delivering the Word. Should the pastor be involved in the church activities? Of course, the pastor should know what is going on and weigh in on major decisions, participate in meetings, and handle ministry needs throughout the church. However, with having an Executive Pastor, this becomes something the pastor can choose to participate in. The pastor is then able to focus more on “feeding the flock” than simply administering it. 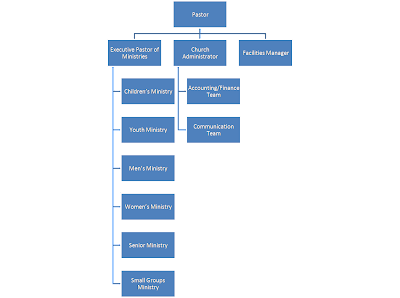 (Click on image to enlarge it.) Lots of models are out there. What do you think about this one?