How do you measure success in ministry?

Every pastor wants to have a successful ministry. Sadly, many compare themselves to the highly visible leaders of large ministries and feel like a failure in comparison.

The size of your ministry does not determine the level of your success.

[from LifeChurch.tv : swerve by Craig Groeschel]

Beautiful resources for creative churches using media can be had for FREE! throughout the rest of this month.

Worship House Media is generously offering a free Daily Download from December 1 on so there’s no reason not to grab a whole slew of downloads. Come back each weekday and download the freebie, and be sure to check out the featured producers Christmas offerings as well!
Posted by Don G. Brock at 10:04 AM No comments:

We don’t determine what is sin by taking a poll. Nevertheless we preachers are interested in what our listeners say is sin or isn’t sin. It’s a feedback channel on the effectiveness of our preaching to the church … and to the world. We evangelicals might think that the whole notion of sin has gone out the window and the America is going to hell in a hand basket. Yet at least one researcher has tested Americans view of sin and it might be helpful for us preachers to know what Americans say — both the evangelicals and the rest of America.

The #3 sin in America is using Hard Drugs. 56% of Americans consider using hard drug as sin. Older folk (68%) are more inclined than those under 35 (60%) to condemn drugs, but still the vast majority of American consider drug use is sin. In America we can condemn hard drug use as sin and say nothing unpopular, even among unbelievers.

The #4 sin in America is “Not saying anything if a cashier gives you too much change back.” Just two percentage points less than using hard drugs (63%) of Americans believe if a cashier gives you extra change and you say nothing about it you have sinned. Actually, slightly more evangelicals listed this as sin (94%) than listed the sin of using hard drugs (91%). In America we can preach against this “little” sin and be totally mainstream — even among unbelievers.

Sins #6-#12 show Americans believe in sin. There are two more sins the majority of all Americans agree on: #6: homosexual activity and #7: not reporting income on a tax return. After these top seven sins which the majority agree on condemning, still a large number of Americans condemn sins #8-#12 including pornography, gossip, swearing and premarital sex.

How long until Christianity is a minority? 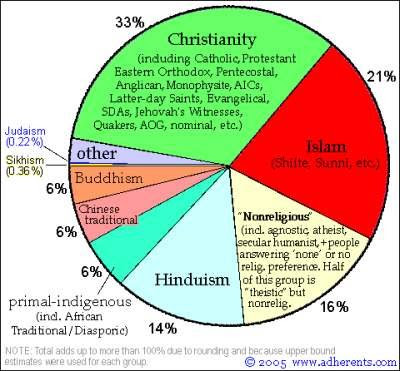