"Your church’s foundation will determine both its size and strength. You can never build larger than your foundation can handle." - Rick Warren 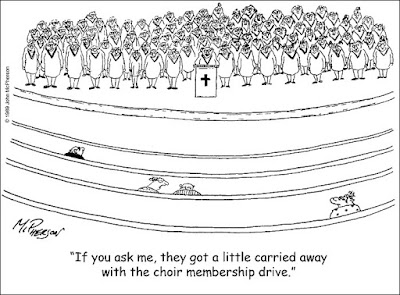 "Self-interest is the enemy of all true affection." ~ Franklin D. Roosevelt

Another religious-themed attraction for Gatlinburg

Officials in Gatlinburg, Tennessee have announced plans to open a religious-themed attraction at the site of the old Christus Gardens, which closed in January 2008 after nearly 50 years.

Christ in the Smokies Museum and Gardens, backed by local businessmen, is to open next spring.

Christus Gardens portrayed the life and death of Christ. Millions of people had visited it, just off the main parkway through the Smoky Mountain resort town.

In a news release Monday, officials said the developers have been acquiring items from around the country for the new exhibition.

The site was to have been developed for condominiums, but those plans fell through.
Renovations at the site are already under way.

[The Associated Press.]
Posted by Don G. Brock at 6:51 AM No comments:

Taking a huge risk without patiently gathering the facts, seeking wise counsel, keeping in alignment with our life’s purpose, and lots of prayer is simply unwise. Faith is not an excuse to be lazy and irresponsible.

After patiently gathering as many facts as you can, seeking wise counsel, striving to keep in alignment with your life’s purpose, and lots of prayer, big risks still require faith. There remains that "stepping into the unknown," "jumping off the ledge," "entering the point of no return," that requires faith.

[from LifeChurch.tv : swerve by Guest Blogger]
Posted by Don G. Brock at 6:41 AM No comments: