Is Your Church Filled with Extravagant Givers?

Discover how to take your congregation's faithfulness in giving to the next level (even in times of economic uncertainty)!

Get the most out of this Church Leader Insights Simulcast:
- Make it a team event! Turn up you computer speakers and invite your entire team to join you around your computer You could even connect a projector for easier viewing.
- For less than a half a tank of gas (maybe less than a quarter tank) you can experience this powerful seminar in the comfort of your own home or office.
- Take advantage of the savings this simulcast provides. Just think – You’ll get the same live experience with Nelson Searcy that thousands have already traveled great distances and paid much more to be part of, for less than the cost of a half tank of gas… What can you do with those savings?

What other pastors are saying: "In the past year, our church has experienced a 15% growth in income by implementing just a few simple steps. While our summer months were once a financial nightmare, we have seen our income not only maintain, but grow the past two years. And the Christmas offering idea was a huge success. With the Stewardship System in place, we are seeing our needs met and greater opportunities for ministry than we’ve ever seen before." - Mark Canfield, Lead Pastor, Pinellas Community Church

REGISTER NOW BEFORE THE SIMULCAST IS SOLD OUT! 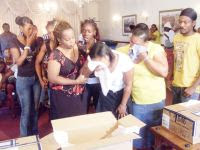 It was an emotional scene at the Restview Funeral Home yesterday when the family of Grand Bahama's murdered four missing boys gathered for their first glimpse of the boys' remains since they went missing in 2003.

The families all gathered in the waiting areas as officials readied the remains for viewing. Each family was called up one by one to view their loved ones remains, resulting in a series of tearful and emotional expressions of grief and to some degree relief.

Funeral arrangements have been made for the boys and it was revealed that the service, financed by the Grand Bahama Port Authority, will be held on Saturday, July 5, at the Community at Heart Tabernacle Church of God of Prophecy.

Deeply grieved and disturbed over the abduction and death of each of their sons five years ago, mothers of the boys, had been long awaiting the release of their loved ones' remains to allow them a proper burial.

The latest plea came in May when the mothers, led by pastor Glenroy Bethel, who heads Families for Justice, expressed their grief at a press conference and pleaded to the Attorney General for help.

Beginning May 2003, the disappearance of five adolescent boys over a six-month period in Grand Bahama baffled residents, the Royal Bahamas Police and Defence Force, the Federal Bureau of Investigation (FBI), the National Centre for Missing and Exploited Children (NCMEC) and even Scotland Yard.

After a two-month lull, 11-year-old Junior Reme disappeared on July 29 and then Desmond Rolle, 14, was reported missing on September 29.

The boys all frequented the same game room, attended government school and were bag packers at the grocery store.

The skeletal remains of four young men were found on Sunday, October 26, 2003 in a remote pine forest area in East Grand Bahama one day before police say the admitted perpetrator, Cordell Farrington, had turned himself in.

[By ANGELO ARMBRISTER - Freeport News Reporter]
Posted by Don G. Brock at 9:11 AM No comments:

Over the past few weeks we’ve had the opportunity to reflect on the contribution Caribbean people have made to British society at various events celebrating the 60th anniversary of the arrival of the Windrush. The ship’s passengers were the first of thousands of West Indians who immigrated to the UK in the 1950's and 60's.

Many travelled to the UK in response to the British government’s call for people in the Commonwealth to work in labour starved industries. In making that decision to immigrate to the UK, the Windrush generation showed themselves to be ambitious, adventurous, and motivated individuals. As a result of their hard work, they were able to buy their own homes, raise their families and see their children go to university and become professionals.

They also overcame racism and discrimination, and laid a foundation from which subsequent generations have greatly benefited.

One of the greatest achievements of the Windrush generation was the creation of Britain’s black church movement. Some of our greatest and oldest denominations, the New Testament Church of God, the Church of God of Prophecy, the Bibleway Church of our Lord Jesus Christ, the New Testament Assembly, and Church of God in Christ were formed during this time. Spurred on by their faith, their desire to win souls for Christ and their dream of owning their own place of worship, those early church leaders brought black people together.

Let’s be honest, if it were not for our churches and the glorious gospel message they spread, many people in our community would be truly lost – spiritually, socially and culturally. Our churches have helped us to reconnect with God, overcome character flaws, fuelled our ambitions, and encouraged us to engage in charitable works.

We should admire, honour and learn from the Windrush generation. Their values have helped mould and shape us, and they have contributed greatly to the spiritual life of this country.

Windrush pioneers, we salute you and thank God for you.