With America seeing huge attacks against the Christian faith, one congressman is not sitting idly by and allowing Christianity to be pushed out of the public square.
"Over the last several decades we have seen this constant erosion of just an access to the marketplace of ideas," Virginia Congressman Randy Forbes said on Friday's Family Talk radio broadcast.
"We don't want to dominate the marketplace," he noted. "We don't want to control it. We just want to have faith and religion having a seat at the table."
Forbes is the founder and chairman of the Congressional Prayer Caucus and active in defending the place of faith in American society.
Recently in May, Forbes and some 30 other congressmen defended a National Day of Prayer event held at the Cannon House building when protesters tried to block it from taking place.
Last month, he also introduced a bipartisan resolution reaffirming "In God We Trust" as the official motto of the United States.
"I think overwhelmingly people across America would say 'in God we still trust,'" he told Dr. James Dobson on the conservative radio show. "I think it's the time for us to have that kind of legislation."
Before Forbes was featured on Friday's broadcast, Dobson noted to listeners that the newly launched Family Talk is not being turned into a ministry that has "a political or public policy bent." But he stressed the significance of still addressing such issues and was unapologetic about doing so with passion.
"That's who we are and might as well state that up front," said Dobson, who started Family Talk with his son after leaving the prominent Focus on the Family ministry in February.
"This is the one reason that I didn't want to retire when I left Focus on the Family," the 74-year-old conservative evangelical leader stated. "The country is in a great deal of trouble and I just felt like we needed to do something about it."
Like many like-minded Christians, Dobson feels there is a growing attack against Christianity and efforts to eliminate all references to the Christian faith.
Expressing the same level of concern, Forbes said "anti-faith" groups around the country are amassing huge sums of money and focusing their resources on one particular situation or lawsuit so that they can get a precedent.
But through the Congressional Prayer Caucus, Forbes and his fellow congressmen have had some success in dealing with the attacks.
After some 60 congressmen wrote a letter last year to a judge who initiated criminal contempt proceedings against two high school officials in Florida's Santa Rosa County School District for praying during a luncheon, the case was dismissed.
"We have to make sure that these individuals who are making these decisions know that it's not just the anti-faith groups that are looking at what they're doing, but it's people of faith as well," Forbes said.
A number of states have begun to form prayer caucuses, including Mississippi and Virginia. Part of the purpose of prayer caucuses is to monitor legislation, agency rulings and court opinions that deny religious freedoms and access to the marketplace of ideas for people of faith, he said.
Forbes hopes to see prayer caucuses in every state "because it would be the first time that we have been able to integrate all of these policymakers across the country so that they can know what's going on and we can have policies that effectively deal with some of these attacks before it's too late."
While "anti-faith" groups are becoming increasingly vocal, Forbes encouraged Christians to be courageous and let decision makers and others know that "there is not just a single voice – that being the anti-faith voice – but there are people of faith that are standing up as well."
[from The Christian Post RSS Feed by Nathan Black]
Posted by Don G. Brock at 5:54 PM No comments:

The Four Most Difficult Decisions for a Rural Pastor 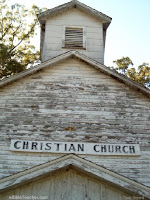 In his new book, Transforming Church in Rural America, Shannon O'Dell share his heart and passion for small-town America's thousands of churches, and the pastors who lead them. Shannon shares a powerful vision of relevance, possibility, and excellence for small churches across the country, and it's a great read if you find yourself pastoring a small church in a tiny community.In the book, Shannon lists what he thinks are the Four Most Difficult Decisions for a Rural Pastor:
1. To Pastor in Rural America... with low incomes, low resources, and low expectations.
2. To reach the lost and unchurched. Most people say they want to reach the lost... until they do and then the church starts changing.
3. To equip the church with accurate and healthy structure... change bylaws, constitutions, and church policy as necessary.
4. To remove "Holy Cows" to be more effective... such as pews, property, and people.
I've served in my share of small, rural churches. I think Shannon is right on. Many small churches are stuck. Many are stuck in a structure that is literally a hundred years old. Many small churches say they want to reach the lost, but when people start coming to Christ and the status quo of the church changes, all of a sudden they're not quite as excited about it.
If you serve in a rural church, I really think this book will help you. And, New Leaf Press has agreed to give one in every ten people who comment on this post a FREE copy of Shannon's book. All you need to do is go here!
If you're the pastor of a rural church, what do you think is the HARDEST part of the job?
[from MMI Weblog]
Posted by Don G. Brock at 11:15 AM 1 comment:

Eight Qualities of a Minister