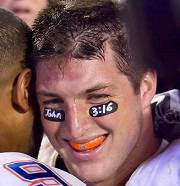 In what some are already calling the "Tim Tebow rule," the NCAA Football Rules Committee is proposing that college football players be prohibited from writing anything on their eye black -- the very types of messages the former Florida Gator quarterback made popular with various Bible verses.
The recommendation was made by the committee in an announcement Feb. 11 and it now must be approved by the Playing Rules Oversight Panel.
The committee actually called the new rule a "clarification" because a rule that apparently would ban such messages already was in place. The clarification, which would take effect this fall, says "if eye shade is worn it must be solid black with no words, numbers, logos or other symbols."
Tebow -- the 2007 Heisman Trophy winner who just completed his senior season -- was not mentioned, although he popularized the trend, and the nation noticed. On the same day that Florida played Alabama in the SEC Championship Game Dec. 5, the No. 1 Google "hot" search in the U.S. was John 16:33, the verse Tebow wore on his eye black.
In fact, Tebow's Scripture choices were among the Top 10 Google searches in the U.S. during nearly every major Florida game in 2009. For the Sept. 19 game against Tennessee, his choice of Romans 8:28 was the No. 5 search; for the Oct. 10 game against LSU, 1 Thessalonians 5:18 was the No. 7 search; and for the game against Florida State -- his final home game -- Hebrews 12:1-2 was the No. 3 search. His choice of Ephesians 2:8-10 was the No. 4 search for the Jan. 1 Sugar Bowl. The Google trend dates back to the 2008 BCS Championship Game, when John 3:16 -- Tebow's verse for that game -- landed at the No. 1 spot.
Tebow's eye black was by far the most-followed eye shade in college football, but he wasn't the only one doing it. Former Oklahoma State quarterback Zac Robinson wore on his eye black the words "press on," words taken from Philippians 3:14, a verse that was repeated by his father often at family gatherings. His father died in October. Ohio State quarterback Terrelle Pryor also wore Bible verses on his eye black, including Philippians 3:14. Pryor, though, was involved in one of the more controversial instances of eye black when he wrote the word "Vick" under his left eye as a tribute to Michael Vick. Vick is a controversial figure to many because of his former ties to a dog-fighting ring, although at this year's Super Bowl he shared his how his life has changed and how "I feel I'm in the back seat now and God is in the front."
The NCAA's football rules already prohibited "anything on the uniform other than a player's numbers; a player's name; NCAA Football logo; memorial recognition; the American flag; or institution, conference or game identification. No other words, numbers or symbols are permitted on a player's person or tape." The rule was part of the rules section on illegal equipment.
[byMichael Foust - Baptist Press]
Posted by Don G. Brock at 2:43 PM No comments: