Pastor Thomas Dexter "T. D." Jakes Sr. (born June 9, 1957) is the chief pastor of The Potter's House, a non-denominational Pentecostal megachurch, with 30,000 members, located in Dallas, Texas.  His church services and evangelistic sermons are broadcast on The Potter's Touch, which airs on the Trinity Broadcasting Network, Black Entertainment Television, the Daystar Television Network, The Word Network and The Miracle Channel in Canada.

Other aspects of Pastor Jakes' ministry include an annual revival called "MegaFest" (which draws more than 100,000 people during that period of time), an annual women's conference called "Woman Thou Art Loosed", and gospel music recordings.
Posted by Don G. Brock at 6:45 PM No comments: 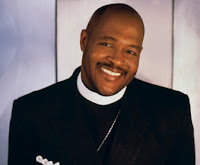 Pastor Winans founded The Perfecting Church in Detroit, Michigan in the early 1990s, and released an album with the church's choir in 1992 entitled Introducing Perfected Praise.  A second album, Friends, appeared in 2001.  His 2007 release, Alone but Not Alone, was nominated for a Grammy award for Best Contemporary R&B Gospel Album.