Southern Baptist president Johnny Hunt delivered an impassioned and fiery message to fellow Baptist leaders on Tuesday, imploring them to get out of the lukewarm state found in many of America's pulpits.

Referring to the recent national spelling bee word that had puzzled many, Hunt said, "America has not heard of the word 'laodicean' but I'm afraid that the Church has not perceived it."

His address during the Southern Baptist Convention's annual meeting in Louisville, Ky., was a challenge to a denomination that has begun to see decline in membership.

According to statistics recently released by LifeWay Research – the research arm of the SBC – Southern Baptist membership will fall nearly 50 percent to around 8.7 million by the year 2050 if the current trend continues.

Membership dipped by 0.2 percent in 2008. While losses only began in 2007 after years of growth, Ed Stetzer, director of LifeWay, said the rate of increase had been declining by 0.06 percent every year.

Titling his message "The State of the Southern Baptist Convention from Where I Sit," Hunt cited a passage from Revelation and indicated that many have become apathetic, indifferent and have lost enthusiasm.

"You can walk to the pulpit, you can lead the music, you can teach a Sunday School class and the attitude is 'I've been there and I've done that.' There's no tear in your eye, there's no fire in your soul, and there's no anticipation after delivery," he said.

"You can get to the point [where] you're so strong you can get up, read through your devotion, have this brief prayer and go. We become professionals. We know how to do it," Hunt added, lamenting how many have lost their dependence on the grace and Holy Spirit of God.

One of the greatest needs of the pulpits of America, he pointed out, is "more emulation of the truth of almighty God to match the exhortation of the proclamation of almighty God's word."
Southern Baptists this week will consider adopting the Great Commission Resurgence declaration, which reaffirms core Christian doctrines and aims to renew a passion for evangelism and church planting in America.

But Hunt is not concerned with simply adopting a document. After all, talk is cheap, he said.
What he's concerned with is seeing true commitment among Southern Baptists to the Great Commission Resurgence.

"If God were to break the hearts of us, the pastors, and we would ... realize out there in those pews there's gold in them there pews! It's amazing how God's people will rise up and take a challenge," he highlighted. "They're not looking for a program to follow. They're looking for a vision to embrace."

He stressed that they don't have a money problem, for God has been good to them. "We have a vision problem," he said.

"God help us to get a vision of the lostness of the world," said Hunt, who is still convinced that the Gospel will be "taken and penetrate the lostness and the darkness of all nations" in his lifetime.

Hunt was re-elected for a second, one-year term as president of the SBC – the largest Protestant denomination in the country.

[from The Christian Post by Lillian Kwon]
Posted by Don G. Brock at 1:12 PM No comments:

CLEVELAND, Tenn. (AP) - Gunmen in the African nation of Mauritania killed an aid worker from Tennessee during an attempted abduction.

Leggett headed a school for computer science and languages.

Cleveland Rotary Club President Michael Cole told the Chattanooga Times Free Press that news of the slaying is shocking and "not something that you'd expect to happen to somebody you know."

Cole said Leggett spoke to the Rotary Club several months ago about his work in Africa.

[Information from: Chattanooga Times Free Press, http://www.timesfreepress.com and The Associated Press]
Posted by Don G. Brock at 11:15 AM No comments: 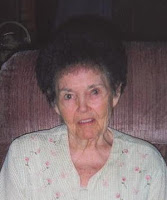 Gerdia Mae Shewmaker, 80, of Orange, died June 22, 2009, at Harbor Hospital in Orange.Funeral services will be at 10:00 a.m. Thursday, June 25, 2009, at Harvest Outreach a ministry of the Church of God of Prophecy in Orange under the direction of Claybar Funeral Home with Reverend Joe Raiborn officiating.

Burial will follow at Hillcrest Memorial Gardens near Bridge City.

Gerdia was born on May 11, 1929, in Morgan City, Louisiana. She was the daughter of Lawrence W. Trahan and Gertrude (Robicheaux) Trahan. Gerdia received her ministers licensed from the Church of God of Prophecy in 1952. She served as a missionary who traveled all over the world. She also severed as pastor of several churches and retired four years ago from Harvest Outreach a ministry of the Church of God of Prophecy in Orange. Everyone who knew Gerdia loved her.

Survivors include her sisters, Belvia Jowell and her husband E.C. of Orange and Shelia Marburger of Orange; and a host of nieces and nephews.

For more information, CLICK HERE.
Posted by Don G. Brock at 10:24 AM No comments:

Dr. David Roebuck of the Dixon Pentecostal Research Center, Hugh Carver with the Church of God Men & Women of Action, and Paul Holt the Church of God of Prophecy Heritage Ministries Director, have announced a cooperative effort to refurbish the First Assembly House near Fields of the Wood in Murphy, NC. 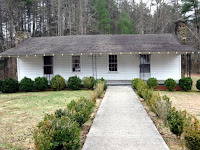