One Nation, Under God

Will America hold to the idea of Christianity? Or, is God being removed from the public square (secularization)? President Obama seems to be a secular leader and that message has been well received in Washington.

For example, for more than 40 years the Air Force has flown over the "God and Country Festival" in Idaho. But not this year! The Pentagon says it cannot supply planes because the festival endorses religion. To diminish spirituality by denying the people of Idaho a flyover is another example of secularists being disrespectful to people of faith. It's not a religious event, it's a "God and Country Festival." "God" is on our money. There's no reason on earth that the Air Force shouldn't fly over the festival.

Also, the president didn't attend any events at the National Day of Prayer.

And, when Mr. Obama spoke at Georgetown University, a religious symbol behind him was covered.

But the truth is, the USA has become the strongest, most prosperous country on this earth largely because of its Judeo-Christian traditions. Will we now abandon them, or stand up for our faith?
Posted by Don G. Brock at 10:27 PM No comments: 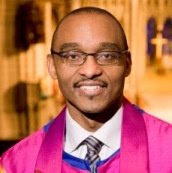 He has been criticized for his $600,000-plus salary package which included a $250,000 annual salary and $11,500 living allowance (see earlier post of this Blog). The package was approved by church members. Dissidents unsuccessfully tried to block his installation by going to court charging that the package strained the church's budget.

After considerable prayer, Braxton concluded that because of consistent discord, it was impossible to establish a fruitful covenant between him and the congregation. Therefore, his resignation would be the right thing to do for the congregation, his family and for himself.

[Christianpost.com]
Posted by Don G. Brock at 9:59 AM No comments: