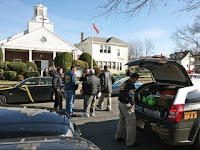 A gunman entered a northern New Jersey church during Sunday services and shot three people in the vestibule, killing his estranged wife and injuring the other two before fleeing, authorities said.

Detective Capt. Robert Rowan told The Star-Ledger of Newark that the victim, 24-year-old Reshma James, had recently moved from California to escape an abusive marriage and had filed a restraining order against Pallipurath.

When he came to into the church, Pallipurath said "I came to take my wife," a witness told The Star-Ledger. Authorities believe he acted alone.

About 200 people were attending services in the sanctuary of the church, whose members are mostly first-generation Indian immigrants and their children.

The victims were taken to St. Joseph’s Medical Center in Paterson, where Mr. Pallipurath’s wife, Reshma James, 24, died about 4 p.m., the police said. The other victims, both listed in very critical condition, were identified by church members as Ms. James’s relative, Silvy Perincheril, 47, of Hawthorne, N.J., who is the principal of the church’s Sunday school, and Dennis John Malloosseril, 23, a church director.

“It was very scary,” Anna Manimalethu said. “My kids are still scared.”

The Clifton police described Mr. Pallipurath as armed and dangerous, 5 feet 8 inches tall and 160 pounds. They said active restraining orders had been issued in California and New Jersey against him after domestic violence complaints by his wife, who had moved recently to New Jersey. Detective Capt. Robert Rowan said it appeared the gunman had driven from California to try to force her to return with him.

Members of the church gave a more elaborate account of the woman’s hardships, citing an arranged and abusive marriage that had left her terrified. A family friend, Aniyan Panavelil, said Ms. James, a registered nurse who grew up in India, had wed Mr. Pallipurath, an American, in India a year ago in an arrangement made by their families.

“He said he couldn’t do it anymore,” Mr. Panavelil said. As for Ms. James, he said, “He was torturing her too much.” The couple separated when they returned to this country, Mr. Pallipurath going to California and Ms. James to New Jersey, where she took refuge with Ms. Perincheril.

Ms. James began attending services with Ms. Perincheril at St. Thomas Knanaya, where some 60 families — first-generation Indian immigrants and their children — worship in a Christian tradition that traces its heritage to Abraham and its culture to Jews of the Aramaic-speaking regions of Israel and Syria, who migrated in 345 A.D. to the Malabar coast, in what is now the state of Kerala, in southwest India.

In recent decades, thousands of Knanaya people have migrated to North America, starting churches in Canada, New York, Massachusetts, Texas and elsewhere. They preserve many customs modeled on Jewish traditions, including the menorah, unleavened bread at Passover and wedding canopies, and they practice endogamous marriage.

The parish of St. Thomas Knanaya was founded in 1987 as part of the Universal Orthodox Church, with allegiance to the Holy See of Antioch. Most members formerly belonged to St. Peter’s in Yonkers, and the congregation met in rented spaces. But in February 2000, it bought the building at 186 Third Street in Clifton, set on a residential block in a working-class neighborhood 10 miles west of Manhattan.

What does your church do about security for your congregation? Do you feel that church security is becoming more of an issue?Click "comments" below and leave your comments.
Posted by Don G. Brock at 9:39 PM No comments: