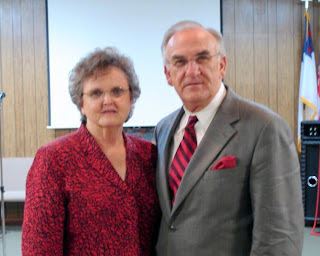 Funeral services:
Monday at 2:p.m. at the Crossroads COGOP

Please join me in prayer for the family.
Posted by Don G. Brock at 1:08 PM 1 comment:

About USD 642 million will be invested by the United Methodist Church in various programs to be developed worldwide in the 2008-2012 period, according to Bishop Gaspar João Domingos.

The amount was approved by participants to the United Methodist Church General Conference that took place in Texas under the theme “Future with Hope.”

According to the bishop, this amount will cover every program of the church worldwide, in the next four years, with USD 12 Million being allocated to the “Africa University” in Zimbabwe, from which USD 2 million will be in vested in theology courses.

During the meeting, several topics were analyzed such as “leadership for the challenges of the millennium,” “development of the church,” “ministry with the poor,” and “mission associated to global health” among others.

The conference brought together 992 delegates from various countries, with Angola represented by the church`s West and East conference.
Posted by Don G. Brock at 12:00 AM No comments: