Some Things I've Noticed About Pastoring

- It is a very rewarding position
- It is a very painful position
- It cost you your life
- One mistake can cancel a thousand rights
- There is no time clock it is 24 hrs a day 7 days a week and 52 weeks a year...
- Your mind is always on the church.
- It requires nerves of steel and guts to stand up to people who oppose the Vision
- Good people will become casualties of the Vision ... If they can't see it by now they never will
- You have to learn to say good bye
- Decisions are made not based on one person or one group of people but they are made by what is best for the Body(Congregation) as a whole. (This perhaps is one of the most difficult)
- Sometimes the right decisions are the most painful
- Somebody in the church always knows better

[from The daily story of a growing church by David Boggs]
Posted by Don G. Brock at 10:47 PM No comments:

Pastor Jim Bradford Is Selected To Lead The Assemblies of God

With An Emphasis on Church Planting

Less than a week after Assemblies of God announced John Palmer’s resignation as General Secretary, his replacement is named, Dr. James Bradford, who says he’s looking forward to the new challenge.

“The Assemblies of God is at a wonderful moment right now, nationally. We’re seeing the emergence of a lot of young leaders, very creative leaders. A whole new emphasis on planting new churches, revitalizing existing churches and I hope to especially be a part of fueling that process and encouraging young leaders.” says Dr. Bradford.

Dr. Bradford is currently the pastor of Central Assembly of God. To read Pastor Jim's blog, click on the list of pastor blogs in the right column of this Blog.

The Executive Presbytery unanimously appointed him and he’ll assume the duties of the General Secretary’s office immediately. Those duties include keeping records of the minutes, official documents and issuing the credentials for the 35,000 AG pastors and ministers. Bradford will continue as pastor of Central Assembly through Easter.

Nepotism in the Church 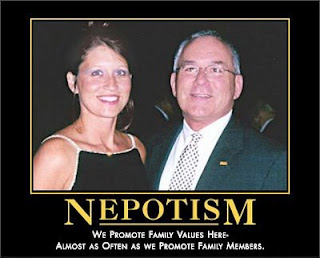 In an organization which promotes very high standards of ethics and morality, the church is practicing nepotism as being acceptable. For years, church leaders have hired, promoted, paid, and protected their wives and family members - effectively doubling their household income. Leaders that pay their wife as secretary, administrative assistant, or office manager with church funds, claim the benefits of loyalty and confidentiality. God only knows how often it also protects secrecy.

Nepotism is the practice of allowing employment and economic policies that permit favoritism toward one's family. It includes giving favored employment positions to family members as well as encouraging business transactions with other family members.

I don’t think it’s possible for a leader to fairly evaluate the work of his or her spouse. Even if it were possible (and I don’t think it is), the simple perception of wrongdoing that arises in the minds of the others is reason enough to consider such relationships to be inadvisable and unethical.

Church leaders are more involved in the business of the church today than ever. Some even appoint their own Finance Committee (which opens the door to conflicts of interest, and closes the door to independent thinking and review). Some pastors even appoint their wife as local church Treasurer, a clear conflict of interest which should never happen.

Clergy leaders are expected to establish a reputation (and live up to it). Their conduct determines their reputation. And the people they serve expect their conduct to be scrupulous.

Conflict of interest refers to a situation where a person’s financial or professional loyalty or objectivity in doing his job may be compromised by an outside interest of the person. We are used to hearing the term used with respect to outside business ownership interests of executives or public officials. For non-executives, the concept comes up more vaguely in conjunction with issues like trade secrets, confidentiality, and non-compete clauses. The term also refers to nepotism.

Of all entities, the church should never cause or allow any decision, action, condition or organizational circumstance that is illegal, imprudent, or in violation of commonly accepted ethics. The church should be committed to strict compliance with all issues of morality and ethics. Committees have a duty to help protect the assets of the church and to report reasonable suspicions of non-compliance in the church. The church must be a place where the reporting of unethical situations is welcomed.

Leaders must be committed to providing an environment in which people will, in good faith, report reasonable suspicions of compliance violations in the church. Church members, committees, and employees of the church must be encouraged to attempt to resolve their concerns by reporting them to church leaders. If they feel uncomfortable addressing their concerns at the local level, or wish for any other reason to address them elsewhere, they should be allowed to make their reports directly to the highest offices of the organization. If that is not acted on, ethics violations could be reported to the public.

Church leaders should never allow conditions, procedures, or decisions that are unsafe, undignified, unnecessarily intrusive, or that fail to provide appropriate care and support, confidentiality and privacy. The godly leader would never cause or allow conditions that are dismissive, unfair, unsafe, unprofessional or undignified. He should never operate without written personnel policies that clarify personnel rules for staff, provide for effective handling of grievances, and protect against wrongful conditions such as nepotism and grossly preferential treatment for personal reasons; discriminate against any staff member; nor fail to apply the standards of the Church’s mission and values.

Accountability to God is vital, but people form their impressions of leaders and churches by looking at the outward appearances (1 Samuel 16:7). The basis for establishing and developing ethical standards is stated clearly by the Apostle Paul in 2 Corinthians 8:21 (NIV): “For we are taking pains to do what is right, not only in the eyes of the Lord but also in the eyes of men.” Or, as the New American Standard puts it in verses 20 and 21, “taking precaution that no one should discredit us in our administration of this generous gift, for we have regard for what is honorable, not only in the sight of the Lord, but also in the sight of men.” Standards, drawn from Scripture, are fundamental to operating with integrity.

The first sign of an unethical leader is when he begins accusing everyone else of being unethical, and attempts to create a secret environment. Look into that leader's ethics immediately. You will almost always find conflicts of interest and nepotism.

When it comes to ethical acts and decisions, church leaders have a special obligation that transcends that of, say, a corporate leader. Church leaders have a responsibility to make sure the leadership they provide is expansive, embracing not only diligence and accuracy but also imagination and creativity and an ethical dimension that addresses moral obligations and decision making.

Interestingly enough, nepotism began in the church and gained its name after the church practice in the Middle Ages, when some Catholic popes and bishops — who had taken vows of chastity, and therefore usually had no children of their own — gave their nephews positions of preference such as were often accorded by fathers to sons. Some nephews, however, were in fact illegitimate sons of popes – thus, in older dictionaries it is possible to find "nephew" defined as "illegitimate son of an ecclesiastic". Several popes are known to have elevated nephews and other relatives to the cardinalate. Often, such appointments were used as a means of continuing a papal "dynasty". For instance, Pope Callixtus III, head of the Borgia family, made two of his nephews Cardinals; one of them, Rodrigo, later used his position as a Cardinal as a stepping stone to the papacy, becoming Pope Alexander VI. Coincidentally, Alexander elevated Alessandro Farnese, his mistress's brother, to the cardinalate; Farnese would later go on to become Pope Paul III. Paul also engaged in nepotism, appointing, for instance, two nephews, aged fourteen and sixteen, as cardinals. The practice was finally ended when Pope Innocent XII issued the bull Romanum decet Pontificem in 1692. The papal bull prohibited popes in all times from bestowing estates, offices, or revenues on any relative, with the exception that one qualified relative (at most) could be made a Cardinal.

It began in the church and an attempt was made to preclude it from the church. It is past time to finish that effort.
Posted by Don G. Brock at 5:50 PM 1 comment:

Felicia Barton, a worship leader at Freedom Fellowship Church of God in Virginia Beach, Virginia, has been selected to be in the top 36 of Season 8 of American Idol.