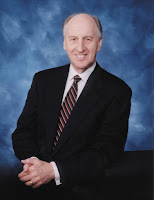 Jack W. Hayford announced Tuesday that he will not seek a second term as president of the International Church of the Foursquare Gospel when his five-year term ends Aug. 31. Hayford, 74, made the announcement during Foursquare’s annual convention being held this week in Anaheim, Calif. Hayford, founding pastor of The Church on the Way in Van Nuys, Calif., was elected president of the 8.4 million-member denomination in 2004. He notified church leaders of his decision not to seek a second term on Monday."I am not resigning, retiring or refusing my availability to serve my church family in any way I may be asked,” Hayford said during a Tuesday business meeting. “I am simply concluding my role as president; it was a decision prompted solely by a clarity born of God's Word and Spirit as my wife, Anna, and I have sought His will."

Glenn Burris Jr., Foursquare general supervisor and vice president of national church operations, will serve as interim president, effective Sept. 1. The denomination’s board of directors will nominate at least two presidential candidates during the church’s 2010 convention in Atlanta. Licensed and ordained ministers, as well as church delegates, will vote on the candidates.