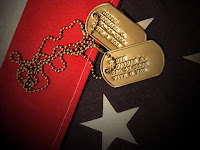 "America's veterans have served their country with the belief that democracy and freedom are ideals to be upheld around the world." - John Doolittle
Posted by Don G. Brock at 6:07 PM No comments: 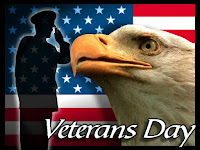 Take a moment today to fly your flag and shake a veteran's hand.

Today is Veterans Day. It is the anniversary of the Armistice that was signed in Compiegne Forest by the Allies and the Germans in 1918, ending World War I after four years of battles. On Monday, Nov. 11, 1918, the day began with the laying down of arms, blowing of whistles, impromptu parades and the closing of places of business. A year later, President Woodrow Wilson issued his Armistice Day proclamation -- the last paragraph setting the tone for all future occasions: "To us in America, the reflections of Armistice Day will be filled with solemn pride in the heroism of those who died in the country's service and with gratitude for the victory, both because of the thing from which it has freed us and because of the opportunity it has given America to show her sympathy with peace and justice in the councils of nations."

For decades Armistice Day was commemorated until it was changed to Veterans Day by an act of Congress in 1954. President Dwight D. Eisenhower called on citizens of the country to observe the day by remembering the sacrifices of all who fought gallantly preserving the liberty of our country. President Eisenhower referred to the name change to Veterans Day in honor of the servicemen of all America's wars.

Veterans Day takes on special meaning once again today as thousands upon thousands of American servicemen and women are fighting wars in the Middle East. Take a moment today to fly your flag, shake a veteran's hand and tell him or her "thank you." And say a prayer for all the soldiers, sailors, airmen and Marines on the battlefield on this Veterans Day.
Posted by Don G. Brock at 10:58 AM No comments: