What the New Overtime Rules Mean for Churches

The Department of Labor announced in May an update to overtime regulations. The ramifications for employers are significant. Nonprofits, including churches, are not exempt from these rules.

These changes likely mean many churches will face substantial increases in their overtime costs, unless they make substantial changes, since the number of employees eligible to receive overtime pay will dramatically increase. And costs will rise again in the future: the new rules also require automatic increases to the salary threshold every three years beginning in 2020.

In the August issue of Church Finance Today, Richard Hammar explains the DOL’s actions and how the Fair Labor Standards Act relates to this, how this affects churches, and the possible steps churches can take to minimize the effects of these changes on their budgets. A “FLSA Classification Decision Tree for Churches and Other Religious Organizations” is also featured.

Please help us pray for Synergy Ministries. We are in need of office facilities to accommodate the counseling center as well as ministry functions. We are asking God for six donors who can give $5,000 each.

Our mission and our work are genuine.

Synergy Ministries, Inc. is a 501(c)(3) non-profit corporation. All donations are completely tax-deductible.
Posted by Don G. Brock at 12:53 AM No comments:

Why We Pray for America 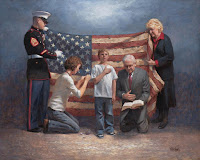 The National Day of Prayer is a vital part of America’s heritage and is as relevant and critical today as it was at the first call by our Continental Congress in 1775. Established in public law by a joint resolution of Congress, signed by President Truman in 1952, then amended to designate the day under the 100th Congress and President Reagan in 1988, it states that:

“The President shall issue each year a proclamation designating the first Thursday in May as a National Day of Prayer on which the people of the United States may turn to God in prayer and meditation at churches, in groups and as individuals.”

In Romans 13, the Apostle Paul exhorts us to “Let everyone be subject to the governing authorities, for there is no authority except that which God has established. The authorities that exist have been established by God. Consequently, whoever rebels against the authority is rebelling against what God has instituted, and those who do so will bring judgment on themselves.”

Not only are we exhorted to submit in recognition of God’s sovereignty, but we are encouraged and exhorted to pray! “I urge, then, first of all, that petitions, prayers, intercession and thanksgiving be made for all people—for kings and all those in authority, that we may live peaceful and quiet lives in all godliness and holiness.” It is both our spiritual responsibility according to God’s Word and it is also our civic duty as a citizen or resident of this great nation to respond when we are called upon by our leaders. During times of war, we have rallied millions to defend our nation against a physical threat, how much more should we rise up to defend her against a spiritual one – the unseen enemy who seeks to ‘steal, kill, and destroy’ all that God has established and all those that follow Him.

As our nation struggles with foreign and domestic threats, economic insecurity, cultural tensions, and continual challenges to basic constitutional rights, citizens of the United States are preparing to heed the call by our elected leaders to rise to the occasion and exercise one of their most precious freedoms – the right to gather, turn to God, and pray. Will you respond to the call? Will you pray for America?

Several have asked about starting a Bible study again. If we meet for one hour on Sunday afternoon's, would you attend? (Please comment below.)
Posted by Don G. Brock at 12:09 AM No comments: