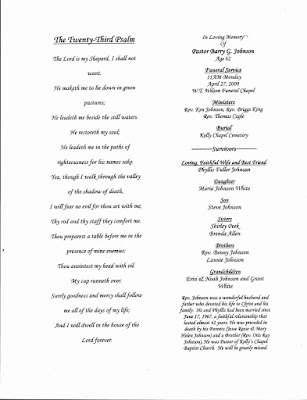 It's hard to explain, the call to a place, the tug that clearly tells the faithful their work should be done in a certain city at a certain time.

For many reasons, the timing seemed off for pastor Lee Claypoole to come to Lexington, Ky., last year. He and his wife had coped with cancer. His wider family suffered from poor health. All the stressors in life seemed to have piled up. Yet he and his family added another one by moving away from the church they called home in South Carolina to start a church from scratch.

"There is no doubt in my mind that God has placed us here," said Claypoole. Claypoole, who launched The Bridge in Lexington this spring, is among a growing trend of "church planters," people who not only want to serve a church, but create one.

All the chatter about the bad economy might actually be good for new churches, said Billy Hornsby, president of the Association of Related Churches, a nonprofit based in Birmingham, Ala., that helps train pastors to plant churches. The group has helped start 30 new churches since January and hopes to have 100 planted by the end of the year.

"When there are bad economics or wars or anything, churches thrive," said Hornsby. "Some 90 percent of our churches have more income this year than last year."

But, as Claypoole said, "church planting is not for the fainthearted." When Claypoole moved to Kentucky last year, he not only relocated his wife and two daughters, he brought with him several dozen believers from the Praise Cathedral in Greer, where he had been a youth minister.

The Kentucky native, who is known in Christian circles for having his dramatic weight loss featured on "The 700 Club," has felt the pressure of encouraging the group to travel north.
But Claypoole, whose church meets at Edythe J. Hayes Middle School, said he is optimistic his church will continue to grow.

"I don't know a year from now what The Bridge will look like," he said. "We dream big."

Ashley Wilson, pastor of LifeGate Church, has benefited from the advice offered through Associated Related Churches. Wilson had never lived in Lexington, although he has family in Owensboro, Ky. He can't fully explain why he chose Lexington to start his church.

"Lexington, Ky., kept coming to my heart and mind over and over again," he said.

He said his research showed there might be a place for his church. It is a place known for drawing young professionals. He thought there was a need for "a really significant charismatic or Pentecostal ministry."

"You have a lot of unchurched and partially churched people here in town," said Wilson, who moved here in 2007 after graduating from Lee University in Cleveland, Tenn. LifeGate Church meets on the campus of Lexington Christian Academy and its numbers are regularly in the dozens. Wilson is encouraged.

Wilson said the stock market decline made the already challenging task of starting a new church more difficult. But, he said, "that just means we have no place to go but up."

One advantage to being part of a new congregation, said Claypoole and Wilson, is that it can be easy to find a way to be of service. The needs are so great at a start-up that it's easy to feel like you can make a real contribution.

Wilson said it's easier to create something new than to try to turn around an already established institution.

"When you are a new church there are 100 things that need to be done right now," Wilson said. "There is always space for you to plug in and use your gifts."

Hornsby said he thinks that's part of the attraction of church planting. His group has helped launch some of the fastest growing churches in the United States.

For example, Church of the Highlands, in Birmingham, Ala., started with 34 people in 2001. Now, about 8,000 attend weekly. Hornsby said the average church has about 85 adults in attendance. The average church planted by his group, which not only offers step-by-step planning information but also offers some financial assistance to start-up churches, has 833 adults, according to the association's research.

But, he said, the key is creating "home churches," small groups that get together weekly for Bible study or prayer, sometimes in individual homes. That direct connection helps create a feeling of belonging even when a church grows rapidly.

Both Claypoole and Wilson, while eager to tend the spiritual needs of all comers, are hoping to attract young people to their church. Both are more likely to be found preaching in jeans or slacks than a suit and tie and hope the casual atmosphere will attract people who haven't yet found a place in more formal settings.

And, in an era when even grandmas are on Facebook, they are planting their spiritual seeds in the virtual world.

Claypoole has a YouTube video for The Bridge and a MySpace page to collect friends.

Wilson has a Web site with a video explaining his mission.

"This is a viral generation," said Hornsby, who started life as a Louisiana State Trooper before entering the ministry three decades ago. He has 2,000 people following him on Twitter, a popular social media network. But all the high-tech gadgets and high level planning hinge on something as old as religion itself: Faith.

For Claypoole, it's the faith he's made the right move.

[By MARY MEEHAN - McClatchy Newspapers]
Posted by Don G. Brock at 10:08 AM No comments:

Our core beliefs determine our behavior. It is vital as leaders that we bathe ourselves in prayer and the Word of God daily.

In 2006, I was fortunate to interview the former Mayor of New York City, Rudolph Giuliani at the Billion Soul Pastors Conference in Orlando, Florida. I asked,“How does a leader know what to do in a horrific situation?” I often wondered how such leaders determine what to do when information was slow or nonexistent. His answer was, “When there is not enough time to make knowledgeable decisions, we must make decisions based upon God’s Word.”

Years after the “Miracle on Ice” at Lake Placid, Mr. Brooks stated, “I’ve often been asked what was the best moment for me? Well, it was ... the sight of 20 young men of such differing backgrounds now standing as one. Young men willing to sacrifice so much of themselves all for an unknown ... But on one weekend, as America and the world watched, a group of remarkable young men gave the nation what it needed most — a chance, for one night, not only to dream, but a chance, once again, to believe.”

In every leader’s life there comes a time when we do more than choose from right and wrong, but have to choose right from right. Rather than copying what others have done, in these hard decisions of right versus right we must pursue the God-given dream that He breathed into us and trust His Word to guide us.

The evangelical men's organization Promise Keepers is urging men to bring "the women in their lives" to a July 31-Aug 1 conference marking the group's anniversary.

For 20 years, the events were men-only. Over the years, Promise Keepers had many critics, such as the National Organization for Women, who accused PK of undermining women's rights and promoting male superiority by calling for wives to submit to their husbands.

[The Associated Press]
Posted by Don G. Brock at 9:15 AM No comments: