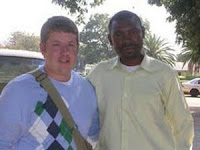 The brother-in-law of a young Baptist pastor who was fatally shot this past week during a drug sting believes that the plain-clothes officers who approached him had “scared him” when they pulled up in a black Cadillac Escalade and came out with guns drawn.

“I’ve rerun it in my mind,” Matt Carpenter said following the death of his sister’s husband, Jonathan Ayers.

“He had used an ATM inside, got into his car and then a black Escalade pulled up and [they] jumped out ... If they ID’d themselves, he couldn’t hear them because his windows were up,” he told the Atlanta Journal-Constitution.

Carpenter also said it was possible that Ayers didn’t know the woman who he dropped off at the gas station, noting that Ayers was the type to help out strangers in need.

"He is one of the Godliest men I've ever known," the Gainesville, Ga., resident told The Associated Press. "We (family members)'re all shocked and absolutely do not believe he was involved in anything illicit or illegal there."

Though Ayers was not the initial target of Wednesday's sting, officers confronted the 28-year-old minister after they saw him drop off a woman who they say had twice been seen selling drugs in the small town of Toccoa, Ga.

The officers said they approached Ayers’ vehicle and yelled “Police. Stop” as he was pulling his car out of the spot he was parked in. Despite the shouts, Ayers stepped on the gas, hitting one officer, who then fired into the car, believing his life was in danger, according to Georgia Bureau of Investigation (GBI) spokesman John Bankhead.

A second shot was fired when Ayers put his car into drive and maneuvered it toward the officer in a “threatening manner,” added Stephens County Sheriff Randy Shirley.

Ayers drove for only a short distance before crashing into a utility pole, wounded from a shot to the liver.

The pastor would later die at a local hospital about an hour after going into surgery. Carpenter claims that Ayers’ last words to the paramedics were “who shot me?” - a statement that could imply that the minister was oblivious to the identity of the two men who confronted him.

The GBI is currently investigating the incident while the two plain-clothes officers are on administrative leave.

Ayers, who leaves behind his 16-weeks-pregnant wife, was pastor of Shoal Creek Baptist Church in Lavonia.

The woman who was in the car with Ayers was taken into custody and faces drug charges. Her name has not yet been released because she is still being questioned about Wednesday's incident.