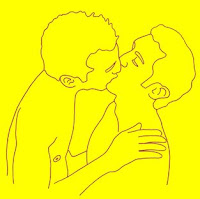 The Associated Press has reported that a judge cleared the way today for gay marriage to begin Wednesday in Connecticut, a victory for advocates stung by California's referendum that banned same-sex unions in that state.

"I feel so happy," said Vickery, a 44-year-old attorney who has a 3-month-old baby with Oliveira. "It's so much more emotional than I expected."

The Connecticut Supreme Court ruled 4-3 on October 10 that same-sex couples have the right to wed rather than accept a civil union law designed to give them the same rights as married couples.

Connecticut and Massachusetts have legalized gay marriage so far. The unions were legal in California until a statewide referendum to ban gay marriage narrowly passed last week. The vote has sparked protests and several lawsuits asking that state's Supreme Court to overturn the prohibition.
Posted by Don G. Brock at 12:33 PM