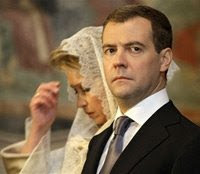 As Russia swears in Dmitry Medvedev as its newest president today, evangelical Christians throughout the historically anti-western nation are reacting with anxiety and uncertainty over the future of their ministries.

Many Christian groups worry that Medvedev, who was elected this year in what many analysts describe as a mostly lopsided, unfair, and uncontested election, will continue many of the authoritarian and repressive directives attacking religious freedom that have characterized the past eight years of the country during outgoing President Vladimir Putin’s administration.

Paul Tokarchouk of Russian Ministries, an evangelical organization based in Russia, said that it remains to be seen what kind of treatment Christian groups will receive over the next few years, though it would probably be a continuation of what Christians in the country have already experienced.

In the past, many foreign Christian groups have faced harassment and government scrutiny, Tokarchouk said.

Tokarchouk emphasized, however, that Russian Ministries was at the forefront of preparing for the future through its summer ministry programs that would train and empower the gospel among young people throughout Russia.

"The number one need is for dedicated, trained, influential people from this young generation who would be willing to take the Gospel to their peers, to their society and who would be relevant,” he said.

“Our prayer is that God would use young generation leaders to reach thousands and thousands of kids,” he added.

[By Joshua Goldberg - Christian Post Reporter]
Posted by Don G. Brock at 10:52 AM