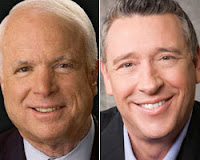 The mainstream media is reporting that Pastor Rod Parsley called upon Christians to wage a "war" against the "false religion" of Islam with the aim of destroying it. And, since John McCain has close ties with Pastor Parsley, that makes him bad.

On February 26, McCain appeared at a campaign rally in Cincinnati with the Reverend Rod Parsley of the World Harvest Church of Columbus, a supersize Pentecostal institution that features a 5,200-seat sanctuary, a television studio (where Parsley tapes a weekly show), and a 122,000-square-foot Ministry Activity Center. That day, a week before the Ohio primary, Parsley praised the Republican presidential front-runner as a "strong, true, consistent conservative." The endorsement was important for McCain, who at the time was trying to put an end to the lingering challenge from former Arkansas governor Mike Huckabee, a favorite among Christian evangelicals.

A politically influential figure in Ohio, Parsley could also play a key role in McCain's effort to win this bellwether state in the general election. McCain, with Parsley by his side at the Cincinnati rally, called the evangelical minister a "spiritual guide."

The leader of a 12,000-member congregation, Parsley has written several books outlining his fundamentalist religious outlook, including the 2005 Silent No More. In this work, Parsley decries the "spiritual desperation" of the United States, and he blasts away at the usual suspects: activist judges, civil libertarians who advocate the separation of church and state, the homosexual "culture" ("homosexuals are anything but happy and carefree"), the "abortion industry," and the crass and profane entertainment industry. And Parsley targets another profound threat to the United States: the religion of Islam.

In a chapter titled "Islam: The Deception of Allah," Parsley warns there is a "war between Islam and Christian civilization." He continues: "I cannot tell you how important it is that we understand the true nature of Islam, that we see it for what it really is. In fact, I will tell you this: I do not believe our country can truly fulfill its divine purpose until we understand our historical conflict with Islam. I know that this statement sounds extreme, but I do not shrink from its implications. The fact is that America was founded, in part, with the intention of seeing this false religion destroyed, and I believe September 11, 2001, was a generational call to arms that we can no longer ignore."

Pastor Parsley, who refers to himself as a "Christocrat," is no stranger to controversy. In 2007, the grassroots organization he founded, the Center for Moral Clarity, called for prosecuting people who commit adultery. In January, he compared Planned Parenthood to Nazis. In the past Parsley's church has been accused of engaging in pro-Republican partisan activities in violation of its tax-exempt status.

This really upsets liberal extremists. So, they go after anything Christian and cast an accusing light on all religious conservatives. There is an attempt here to create an embarrassment because of what happened to Obama and his pastor.
Posted by Don G. Brock at 9:56 PM