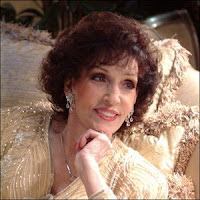 The Home-going Celebration service for Dottie Rambo was held at Christ Church in Nashville, Tennessee on Monday of this week.

What a celebration is was! Bill Gaither was a big part of "gathering" the singers. It was a true send off for the "Queen of Gospel Music."

The Lee Singers from Lee University in Cleveland, Tennessee sang "He Looked Beyond My Faults." They were positioned in the center of all the singers present. Their rendition of Dottie's song was a Capella.

Many letters were presented from people who could not be present. President George Bush said that her music had helped him during his struggles with alcohol. President Bush also sent the flag that flew over the White House on mother's day.

As a grand finale, Sandi Patti sang "We Shall Behold Him." The entire congregation was moved.

About 2,500 people gathered for the farewell. They sang "I go to the Rock" more than once.

Entombment was at the mausoleum at Woodlawn-Roesch-Patton Memorial Park which immediately followed her Home-going Celebration.
Posted by Don G. Brock at 4:04 PM