Southern Baptists Are Now In Decline 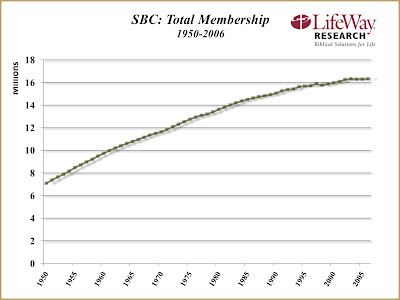 For now, Southern Baptists are a denomination in decline. Experts believe it is a local church issue.

Baptisms are at their lowest levels since 1970 with seven of the last eight years showing annual declines. Even though some might hope the decline in membership numbers is due to lack of reporting, the inescapable conclusion is that baptisms by individual churches is falling off. (LifeWay Research will provide more analysis next month.)

Some might say it’s "only one year," and they would be technically right. But, briefly dwell on the top of the above graph. Reality is, they have peaked.

First, that they have to deal with the continued loss of SBC leaders. They have witnessed a serious (and increasing) depopulation of young leaders at the convention. Also, ethnic leadership remains absent after decades of ethnic change in America. Vacant seats still exist at the SBC table for the ethnic and generational diversity that matches the America they are attempting to reach. The departure by the future leaders of the convention has led to fewer church plants, missionaries, and energetic pastors to lead their faltering churches. They must retain these leaders not because they need them for their churches. They need them to reach the lost whom their churches have yet to touch.

A second issue is the infighting which defines so much of the SBC—its meetings, its churches, and its blogs. It is public knowledge that they do not always settle their differences amicably. The national caricature once again colors many local scenes where First, Second, and even Third Baptist Churches exist in one town because of past infighting. Satan has used their incessant bickering over non-essentials to promote his last great mission on earth—to keep lost people lost.

People simply do not want to hear what they have to say when they can't speak kindly to one another. If the focus of every SBC meeting is a new controversy to be debated, new parameters to be narrowed, and new issues to be fought, the trend toward decline will only accelerate.

The third, and most important, issue is the loss of focus on the Gospel. They must recover a gospel centrality and cooperate in proclaiming that gospel locally and globally. David Dockery and Timothy George pointed the way with their helpful booklet, Building Bridges. They called for a unity around the Gospel, and the time grows increasingly urgent.

The Conservative Resurgence failed to produce a Great Commission Resurgence. It restored the denomination’s value of Scripture but application is often absent, at least in the area of evangelism.
Posted by Don G. Brock at 9:03 AM