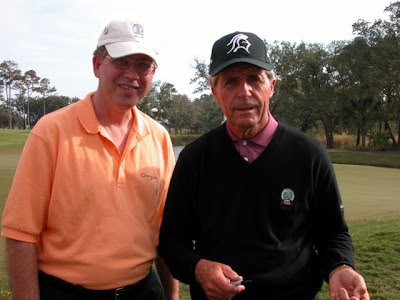 I guess professional golfer Gary Player made his 51st and final appearance at the Masters this week. It was an emotional moment as I watch him bend over and kiss the green as he exited for his final time.
His streak is older than Fred Couples. It predates the term "Amen Corner." It's been around longer than Barbie, hula hoops and audio cassettes.
To what does he owe such longevity? For a guy who boasts he can still do one-handed push-ups at age 72, it's no secret.
He says, "I've exercised diligently, profusely, for 64 years. And that's not easy; very few people go through their lives exercising for 64 years. So it's helped me to have longevity. Growing up and coming along in my career a lot of people ridiculed and thought I was a nut lifting weights and exercising and dieting the way I do. Now I'm sure there are many of them that wish they had done it."
Yvonne and I met Gary Player several years ago and found him to be a true gentleman. He often tells me, "This is the only game you can play all of your life." Or, "Believe it or not, I can still shoot my age. How many sport can you do that in?" If I didn't misunderstand him, he said his waist size has not changed in the past 30 years. Wow!
__________________________________________
Posted by Don G. Brock at 8:09 PM