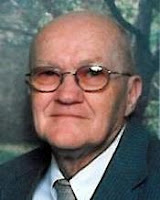 Thomas “Sonny” Martin, 78 of Farmington, WV passed away Tuesday, July 26, 2011 at his son’s home in Cottondale, Alabama near Tuscaloosa.

Mr. Martin was born July 7, 1933, a son of the late Harold and Vivian Bainbridge Martin.

Sonny worked at the Times West Virginian as a Printer for 37 years.  He was a member of the Katy Church of God of Prophecy and also attended Ireland Chapel.  Sonny loved church and he worked in the church for years in a variety of ministries, he especially love to sing in the church.  He was a veteran of the U.S. Air Force and was stationed throughout Europe during the Korean Conflict.  He loved sports of all kinds and was fortunate enough to get to play them often during his enlistment in the armed forces, back in the states Sonny played fast pitch softball and enjoyed playing basketball with his best buddies Darryl Courtney and Scott Tharp.  Sonny always had a smile on his face and never met a stranger.

The Rev. Ron Martin serves as Senior Pastor at Cottondale Community Church, a thriving ministry near Tuscaloosa, Alabama.  Pastor Martin has served in a number of ministerial leadership positions during his lifetime of ministry.

In addition to his parents Sonny Martin was preceded in death by his wife Maxine Martin and a brother Bob Bainbridge.

Friends may call at the Hutson Funeral Home, Route 250 Farmington today, Saturday, July 30 from 5-9 pm and on Sunday from 11am until 2pm when funeral services will be held at 2pm.  Rev. Richard Fluharty and Rev. Ron Martin will be officiating.  Mr. Martin will be laid to rest beside his wife Maxine in the I.O.O.F. Cemetery in Farmington.

Online Condolences may be sent to the family at www.HutsonFuneralHomes.com.
Posted by Don G. Brock at 3:52 PM