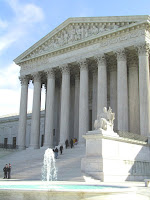 The Supreme Court for the second time in as many weeks refused to hear the case of a high school valedictorian who spoke about their faith in a graduation speech.
The high court said Monday that it would not hear the appeal of Erica Corder, who was forced to apologize for her 2006 speech at the Lewis-Palmer High School commencement in Monument, Colo.
Two weeks earlier, the justices said they would not revive the lawsuit filed by Brittany McComb of Henderson, Nev., who accused school officials of violating her free speech rights and having engaged in viewpoint discrimination when they censored her speech in 2006 because of its Christian content.
In both cases, school officials had screened the valedictorians’ speeches in advance and removed religious references, but the two speakers went forward with talking about their faith.
In Corder’s case, the principal threatened to withhold the valedictorian's diploma unless she issued a public apology for her actions. Notably, however, Corder was still not allowed to graduate even when she issued the apology and wasn't issued a diploma until she added the sentence: “I realize that, had I asked ahead of time, I would not have been allowed to say what I did.”
In response, Corder sued, but federal courts threw out her lawsuit, saying the school didn't violate her rights because her remarks were "school-sponsored," rather than private speech.
Fla.-based legal group Liberty Counsel, which asked the Supreme Court to hear Corder's case, argued that "a valedictorian’s speech is not government speech."
“Everyone knows that a valedictorian earned the high GPA and understands the speech belongs to the student,” stated Liberty Counsel Founder Mathew Staver when his legal group filed the request with the Supreme Court in August. “It is reprehensible that the school district threatened to withhold Erica Corder’s diploma, merely because a few sentences of her 30-second speech included references to God.”
Despite the arguments, the school district maintains that "all actions taken by school officials were constitutionally appropriate."
The case is Corder v. Lewis-Palmer School District No. 38.
Posted by Don G. Brock at 11:22 AM