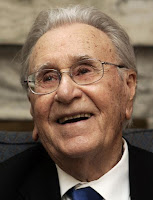 TV evangelist Oral Roberts has died at age 91, a day after he fell at his California home and was hospitalized.
Roberts founded Oral Roberts University in Tulsa, Okla., in 1963 and served as its president until 1993.
"Oral Roberts was the greatest man of God I've ever known," said his son, Richard Roberts, according to Tulsa TV station KTUL. "A modern-day apostle of the healing ministry, an author, educator, evangelist, prophet, and innovator, he was the only man of his generation to build a worldwide ministry, an accredited university, and a medical school."
Posted by Don G. Brock at 3:24 PM