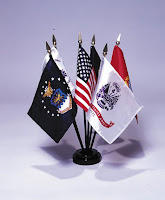 "No one pays a higher price for our freedom than members of our nation's military and their families. As sons and daughters, husbands and wives, and mothers and fathers are deployed, military families endure with exceptional resilience and courage. They provide our troops with invaluable encouragement and love, and serve our nation in their own right. During Military Family Month, we honor the families of our armed forces and thank them for their dedication to our country.

"Though only a small percentage of our nation's population, our troops bear the great responsibility of protecting our people. They, along with their families, serve us every day with courage and dignity. Ensuring that military families receive the respect they deserve and the support they have earned is a top priority for my administration.

"The strength of our nation is measured not just by our success on the battlefield, but also by our ability to support those families who have made so many sacrifices for us. Time and again, military families have shown their heart in the face of adversity. We have a solemn obligation to ensure that while our men and women in uniform discharge their duties, we do all we can to promote and preserve the well-being of their families. We must also support the families of our wounded warriors and our fallen heroes who have paid the ultimate price for the freedoms we enjoy. ...

"Now, therefore, I, Barack Obama, president of the United States of America, by virtue of the authority vested in me by the Constitution and the laws of the United States, do hereby proclaim November 2009 as Military Family Month. I call on all Americans to honor military families through private actions and public service for the tremendous contributions they make in the support of our service members and our nation."
Posted by Don G. Brock at 9:25 AM