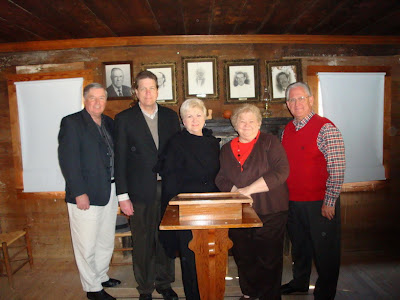 On Tuesday morning, the delegates met at the Church of God of Prophecy International Offices, were greeted by General Overseer Randall Howard, and then made an excursion to rural Monroe County, Tennessee and Cherokee County, North Carolina, where they visited many historic sites shared by both Cleveland-based organizations. Sites visited included Barney Creek, where the Church of God formed as the Christian Union in 1886, the Shearer Schoolhouse site where the Holy Spirit baptism was first received by the group in 1896, the J. C. Murphy Home, where the first General Assembly was held in 1906, Fields of the Wood, and the grave of Richard G. Spurling, Jr., in Turtletown, Tennessee. Tour guides were Paul Holt, Heritage Ministries director for the Church of God of Prophecy, and Dr. James M. Beaty, retired missionary, historian, and professor at Lee University and the Church of God Theological Seminary.