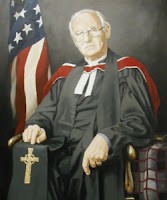 The Rev. George M. Docherty, credited with helping to push Congress to insert the phrase "under God" into the Pledge of Allegiance, has died at 97.

Docherty died on Thanksgiving at his home in central Pennsylvania, according to his wife, Sue Docherty. She said her husband of 36 years had been in failing health for about three years. "George said he was going to live to be a hundred and he was determined," she said in a telephone interview Saturday. "It's amazing that he was with us this long."

Docherty, then pastor of the New York Avenue Presbyterian Church in Washington, just blocks from the White House, gave a sermon in 1952 saying the pledge should acknowledge God.

He was born in Glasgow, Scotland, and was unfamiliar with the pledge until he heard it recited by his 7-year-old son, Garth. "I didn't know that the Pledge of Allegiance was, and he recited it, 'one nation, indivisible, with liberty and justice for all,'" he recalled in an interview with The Associated Press in 2004. "I came from Scotland, where we said 'God save our gracious queen,' 'God save our gracious king.' Here was the Pledge of Allegiance, and God wasn't in it at all."

There was little effect from that initial sermon, but he delivered it again on Feb. 7, 1954, after learning that President Dwight Eisenhower would be at the church. The next day, Rep. Charles G. Oakman, R-Mich., introduced a bill to add the phrase "under God" to the pledge, and a companion bill was introduced in the Senate. Eisenhower signed the law on Flag Day that year.
Posted by Don G. Brock at 1:54 PM