Church Gets $3 Million in Lotto Winnings 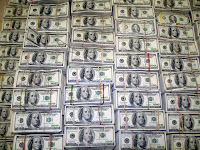 PORT JEFFERSON, N.Y. (Aug. 28) - A New York pastor says one of his congregants donated a winning lottery ticket worth $3 million to his church.

Pastor Crabbe says the donor said "This was why God put the ticket in his hands."

A state Lottery official said Wednesday that the independent Christian church will get a little over $100,000 a year through 2028. The amount could be higher if withheld taxes are refunded because of the church's nonprofit status.

Pastor Crabbe says the 650-member church will give the first year's proceeds to other charities.

Would you accept lottery proceeds at your church?