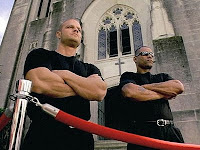 [Check out "Download Documents" in the right column of this Blog. One document is for security training for Ushers and Greeters.]
Posted by Don G. Brock at 1:24 PM