A Study On Tithing 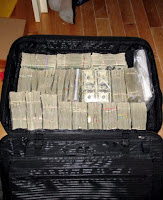 Only 5% of adults tithe, according to a new study by The Barna Group. Those most generous were evangelicals (24% of which tithe); conservatives (12%); people who have prayed or read their Bible in the last week (12%); Pentecostals (11%); and Republicans (10%). The least generous, according to Barna: those under 25, atheists and agnostics, single adults, liberals, and downscale adults. All of those groups gave 1% or less...

In 2007, 84% of all adults donated some money to churches or non-profit organizations. That figure has also remained consistent in recent years.

The median amount of money donated during 2007 was $400; the mean amount was $1308. Those averages are higher than was revealed earlier in this decade, but represent a decline from the previous year. (The mean sum of donations per person in 2006 was $1348.)

Evangelicals Christians distinguished themselves in their generosity. More than four out of five (83%) gave at least $1000 to churches and non-profit entities during 2007, far surpassing the levels reached by any other population segment studied.

Almost two-thirds of the public (64%) donated some money to a church, synagogue or other place of worship. The median amount donated to those religious centers was $101; the mean amount was $883. Those figures were up slightly from the previous year.

The Christian giving was divided between Protestants (mean of $1705) and Catholics ($984).
In contrast, Americans associated with non-Christian faiths gave away a mean of $905 during 2007. Atheists and agnostics provided