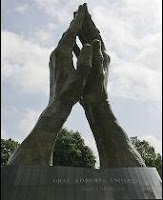 The two professors, Tim and Paulita Brooker, whose Oct. 2 lawsuit claims they were forced out after alleging financial and ethical wrongdoing on the part of Richard Roberts and his family, have asked the school for $2.5 million to settle. Attorneys for the professors and the school declined to comment this week on any potential negotiations, citing a judge's gag order. "We're doing the best we can to go through the legal process," Green said. "Let the legal process take its course."
Posted by Don G. Brock at 9:22 AM