What would it look like if we focused less on the things that make our churches entertaining and more on making disciples? 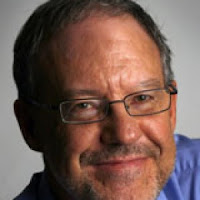 Bishop Patterson was born in Memphis, Tenn., on May 28, 1935, to the late President Bishop of the Church of God in Christ, Bishop J.O. Patterson, Sr. and Deborah M. Patterson. He was the grandson of the COGIC founder Bishop Charles Harrison Mason.

“Bishop J.O. Patterson was a wise and faithful chairman who served in one of the highest offices of the Church of God in Christ,” says Presiding Bishop Charles E. Blake. “The General Assembly of the church is the doctrine-expressing body of the church, and Bishop Patterson led that entity effectively and with vision. He will be greatly missed. We offer our sincere prayers to his wife, family and the Pentecostal Temple congregation.”

Known for his quick wit and incredible sense of humor, Bishop Patterson practiced law in Memphis. He became active in state and local political life as a state representative for one term, state senator for two terms, Memphis city councilman for five terms and as interim mayor of Memphis in 1982.

The Organized Church in America Is In Trouble

Again in 2010, the Southern Baptist Convention baptized fewer people in 2010 than any time since the 1950s.  The nation's largest Protestant denomination also saw declines in overall membership and attendance.

Emory University's Baptist Studies Director David W. Key Sr., who is a Southern Baptist, said the decline reflects the fact that the membership of many Southern Baptist churches is aging.

The only growing denominations in America are Pentecostal, and that is minimal.

What is the problem?  CLICK HERE to learn more.
Posted by Don G. Brock at 12:38 PM No comments:

Eddie Long: My Wife Has Not Left Me

ATLANTA -- A statement was issued Tuesday morning regarding circulating rumors that said that the wife of Bishop Eddie Long had left him in the wake of the out of court settlement with four young men who accused him of coercing them into sexual relationships.
Posted by Don G. Brock at 12:04 PM No comments:

Get Equal, a pro-homosexual advocacy group, has launched a petition drive that calls on the Southern Baptist Convention to apologize for its teaching against the homosexual lifestyle.  Organizers on the group’s website contend the Southern Baptist Convention (SBC) is causing harm to the lesbian, “gay,” bisexual and transgender (LGBT) community, and petition signatures will be delivered this week to the SBC’s annual meeting in Phoenix.

Terry Fox, senior pastor of Summit Church in Wichita, Kansas, and a longtime leader within the denomination, says the group is looking in the wrong place for an apology.  “I think they’re the ones that owe America an apology,” he contends. “Their whole platform, that whole organization ... is nothing but perversion, and it damages families, it damages children.  Ultimately, it damages our own society.”

Pastor Fox, who has been in the ministry for over 32 years, says he is proud that his denomination has stood strong on moral issues in the midst of increasingly liberal Christian teachings.

“It shows [Get Equal] think[s] they have become an accepted organization in America, which I would beg to differ with them,” the pastor adds.  “Any poll you would take from any region in America, including the more liberal parts of the country, they would find that they’re out of sync with all of society.  So I’m embarrassed for them for even asking for an apology.”

In 1995, the Southern Baptist Convention repudiated slavery, denounced racism and issued a public apology for the role the denomination might have played in harming African-Americans. Get Equal leaders liken its desire for an apology to the same action 15 years ago. 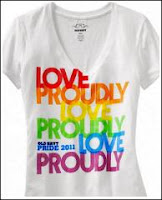 Old Navy's rainbow T-shirts are part of its "Love Proudly: Pride 2011" campaign. The shirts reportedly went on sale June 1 and will be available at select stores throughout the country. Old Navy is donating 10 percent of the proceeds to the "It Gets Better Project," a pro-LGBT campaign.

The T-shirt designs include a white shirt with "Love Proudly" written in the colors of the rainbow, and a black shirt with rainbow-colored stripes.

According to reports, the T-shirts are being sold at some Old Navy stores until the end of June or until supplies run out. Old Navy is already saying they may increase the number of stores next year.

If you would like to get involved, you can let Old Navy president Tim Wyatt know his decision to engage in corporate promotion and financial support of homosexuality is a bad idea, considering the number of mothers buying summer and back-to-school clothes.

CLICK HERE to send your letter to Old Navy.
Posted by Don G. Brock at 11:34 AM No comments: 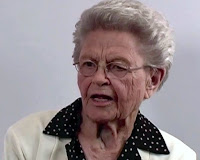 Elva Howard, mother of COGOP General Overseer Randall Howard, has been moved to a rehabilitation center where she will receive physical therapy to help her return to her normal independent and active life.

Sister Howard is 88 years old and is expected to make a good recovery.

Please keep Sister Howard and the family in your prayers.
Posted by Don G. Brock at 11:24 AM No comments: