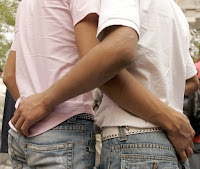 The Christian owners of a guesthouse who were ordered by a judge to pay a gay couple more than $5000 in damages for refusing to let them stay in a double room have appealed the ruling.
Peter and Hazelmary Bull are challenging the decision after several days of consultation with their legal team following last week’s ruling.
The Bulls have implemented a policy of allowing only heterosexual married couples to stay in their double rooms since they opened the Chymorvah guesthouse in 1986.
However, a judge ruled last week that the policy is “unlawful” under Equality Laws, which make it a crime to discriminate on the grounds of sexual orientation.
The Christian Institute’s director, Colin Hart, said the guesthouse had since been “besieged” with demands for double rooms by homosexual couples “seemingly in a bid to destroy the business.”
He also said that Hazelmary Bull had received “abusive and menacing” phone calls and her husband is in the hospital recovering from serious heart surgery.
The Bulls were sued by civil partners Steven Preddy and Martyn Hall when they were turned away from the guesthouse after staff realized that the booking had not been made for a heterosexual couple.
The guesthouse had received a letter from gay rights group Stonewall the month earlier informing the owners of equality law, prompting suspicion that the Bulls were specifically targeted.
Responding to the judge’s decision last week, Hazelmary Bull said that their policy had been based on “our sincere beliefs about marriage, not hostility to anybody.”
In making his ruling, Judge Andrew Rutherford admitted that it “does affect the human rights of the defendants to manifest their religion and forces them to act in a manner contrary to their deeply and genuinely held beliefs.”
[from The Christian Post]
Posted by Don G. Brock at 10:33 PM