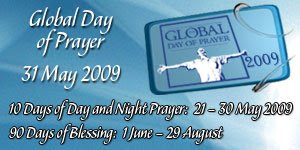 187 Nations are lined up to participate in the Global Day of Prayer.

"To pray is to unite ourselves with Jesus and lift up the whole world through him to God in a cry for forgiveness, reconciliation, healing and mercy ... Prayer is leading every sorrow to the source of all healing ... But most of all, prayer is the way to become and remain a part of Jesus' mission to draw all people to the intimacy of God's love." - Henri Nouwen, The Only Necessary Thing: Living a Prayerful Life

The phenomenon of city-gatherings all over the globe, simultaneously crying out to God for revival, is unprecedented. God is moving in tremendous power in these days and He is calling us to be part of His journey. This journey is beyond the church, it is more than what God is doing for and in His church. It is about what He is doing and getting ready to do for a world so desperate for His love and glory.

He is calling us, his servants, to humble ourselves, to pray, and to seek His face (2 Chronicles 7:14) so that He will fill our communities, cities, nations and all the earth, with His glory (Habakkuk 2:14).

The date is May 31, 2009. Only 33 nations have not responded to the invitation to participate in GDOP. Pray that every nation will be represented in this global prayer meeting. The sole focus on that day is to saturate the earth with prayer.

Find out if there is a Global Day of Prayer event scheduled for your city. If there is - join it. If there isn't - sponsor one. Call the believers of the city together. Pray for a Global Spiritual Awakening, for a fresh Pentecost.

And pray for these nations in Africa - Niger and Reunion; in Asia - Armenia, Azerbaijan, Bahrain, Georgia, Iran, Nepal, Oman, Syria and Yemen; in Europe - Andorra, Belarus, Iceland, Lithuania, and San Marino; in Latin- and Central America (Caribbean) - Anguilla, Aruba, the Bahamas, British Virgin Islands, Dominica, Dominican Republic, Falkland Islands, Grenada, Guadeloupe, Martinique, St. Lucia, St Vincent and the Grenadines, Turks and Caicos Islands, Virgin Islands of the USA; in the Pacific - Nauru; and in North America - Greenland, Saint Pierre and Miquelon. If you are in one of these nations, the Global Day of Prayer leadership team is looking for you - to assist in leading this effort.

[from Blog Entries by webmaster@pathwaypress.org]
Posted by Don G. Brock at 10:45 PM No comments: Links to this post

National Day of Prayer - May 7 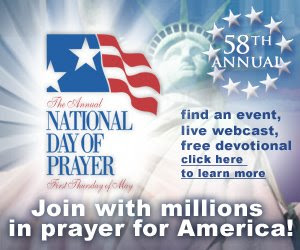 Last year, throughout the nation, millions joined together on the First Thursday in May for the National Day of Prayer. Some believe the numbers were greater than ever before.

The National Day of Prayer leaders say the number of the public-invited events doubled from the previous year, 2007. In addition, there was more favor from local and state governments; more politicians who participated, more access to government buildings, and even more governors. All 50 governors signed National Day of Prayer proclamations. Many mayors participated.

There was a wider scope in the type of events as well: planes, motorcycles, children prayer walks, buses, train, IRS, NASA and police departments.

PrayerFlight - a group of Ohio based private pilots - organized "50 Capitols." These private pilots did 'prayer-flights' over all 50 state capitols, while praying for those states. Military pilots serving overseas and airline pilots and flight attendants were also organized to pray while airborne as well.

Prayer events occurred at past sites of recent tragedies such as: Minneapolis 35W Bridge Collapse, the New Life Church shooting site and the Virginia Tech shooting site. YMCAs and the Salvation Army held events around the nation. In Colorado Springs pastors from 27 denominations filled the Pikes Peak Cog Railway and prayed for the local community and our nation on the 75 minute trip up and back the 14,000 ft peak. In Alaska, a 300 mile prayer train traveled from Anchorage to Fairbanks. In Bakersfield, CA, 30 churches lengthened the National Day of Prayer to three days, highlighted by the formation of a human cross with red shirts.

Prayer events were held in 110 Federal Prisons, national monuments such as Mount Rushmore and the St. Louis Gateway Arch, military bases, stadiums, nursing homes, schools, town halls and in the Senate and Congressional chambers of many state capitols as well as the west lawn of our nation's capitol in Washington, DC. In rain, snow, sunshine or indoors tens of thousands of prayer events took place with every denomination and race present in all 50 states, the Virgin Islands, Puerto Rico, Afghanistan, and Iraq.

There were prayer breakfasts, prayer walks, Bible reading marathons, motorcycle cavalcades, prayer at countless businesses, and even prayer balloon releases marked some of the creativity of our massive national network.

Governors in Minnesota, Texas, Louisiana, and the First Lady of Nevada spoke at their events and were prayed over by participants. Attorney Generals and Judges participated in many states. Michael Reagan, Sean Hannity, Laura Ingraham, Bill Bennett, and Focus on the Family promoted the event. At least 2500 stations nationally carried promotional spots. The event showed up on Facebook, My Space, YouTube, and GodTube. 18,340 military devotions were sent to encourage deployed soldiers.

Millions united in prayer from coast to coast and transformation is taking place in communites throughout America.

Listen to this audio message.

[from Blog Entries by webmaster@pathwaypress.org]
Posted by Don G. Brock at 9:32 PM No comments: Links to this post