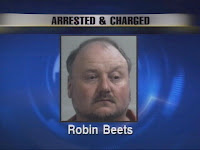 A trusted Pulaski, Tennessee Reverend is facing some disturbing charges.

42-year old Robin Beets is the pastor of the Welcome Valley Baptist Church in Giles County.

Beets is charged with rape and kidnapping. He was arrested earlier this week, now police say they found additional evidence against him. Folks who know the Reverend are stunned.

Beets was released Wednesday from the Giles County jail on $152,000 bond.

Prosecutors said Clarke underreported $100,000 in earned income and concocted schemes to deceive the government about the money. Clarke maintained at trial that he received gifts and love offerings.

Clarke's attorneys argued on appeal that there was not enough evidence to support a guilty verdict and that the jury was not a fair cross section of the community. He is serving his 21-month prison term at an Atlanta federal prison. Judges at the 11th Circuit Court of Appeals ruled that there were no errors at the district court level and that the conviction and sentence should stand.

[from The Birmingham News - al.com by jmacdonald@bhamnews.com]
Posted by Don G. Brock at 11:04 PM No comments: Links to this post

Setting the Environment for Success

Hopefully, every minister of the Gospel wants to be successful in their work for the Lord. Pastors have a heart for church growth, and hopefully Bishops and trans-local church leaders want to create an environment for growth in the Church and the Kingdom.

None of us do this alone. Our business is people. And we need staff, paid or volunteer, to come along side us and be a part of the team.

I believe the following suggestions are applicable to churches, ministries, denominations, and businesses.

What can a leader do to create an environment for success? Here are 10 ideas, in order of importance:

1. Create motivating work. THE most important thing any leader can do to create a motivating environment is to make sure the work every member of the team is doing is strategic. That is, the work is important to success. When you feel like what you are doing is making a difference, it’s energizing. On the other hand, there’s no worse feeling than knowing your work just doesn’t matter. Every leader has some degree of discretion in being able to eliminate or minimize the amount of “muda” (non-value-added work) that flows into a team.

Any job can be strategic. I’m sure you’ve heard the story of the two bricklayers; one of them saw his job as stacking bricks. The other saw his mission as building a magnificent cathedral. Same job – different worldview.

Making sure work is strategic is the best form of job security a leader can give a team. It’s every leader’s job to scrutinize every team member’s work like a CEO looking for jobs to cut. If the work is important, it’s less likely to be eliminated.

2. Recruit "A" players and move "C" players. A players (high performers) tend to be self-motivated to begin with. When you create a team of A players, they feed off of each other. The standards are raised, the energy level increases, teamwork improves, and there’s a low tolerance for anything less than excellence. On the other hand, one or more C players (poor performers or bad attitudes) can infect a team like a cancer, breed resentment, and drag everyone down.

God loves everyone and so do we. There is a place in the church for everyone. However, it is not God's divine purpose for everyone to be in leadership. Nothing is worse than people trying to do something they are not gifted or called to do. And, nothing is more successful than a team with each team member functioning in the role for which they were divinely called and gifted.

3. Don’t micromanage – get out of the way. "A" players don’t need to have a leader breathing down their necks – in fact, it drives them crazy. Show your people that you are interested in what they are doing, but you trust them to make their own decisions and do things differently than you might do them.

4. Promote your team’s work. As a leader, it’s your job to be your team’s PR agent. Make sure their good work gets noticed, recognized, and appreciated. Don’t worry about over promoting your team’s good work – most people love to get good news. Just make sure the bragging is about them – not about you.

5. Loosen up the rules and bureaucracy. As long as your team is focusing on what’s really important (see #1, strategic work), and performing at a high level (see #2, "A" players), cut them some slack. Don’t hassle them with minutia, give them flexibility in work hours, and protect them from useless programs (stupid mandates passed down from people whose job it was to push muda on everyone else).

6. Don’t be a jerk. Sounds simple, but as leaders, we’re all human. No one sees themselves as a jerk, and no one wants to be a jerk. But, there are many. The key is to be open to feedback. Ask a few trusted team members to let you know if you’ve done or said something insensitive or clueless.

I’m fortunate to have a few people who will (tactfully) tell it like it is to me – and while it stings, and I feel like a fool, I completely appreciate it. It gives me a chance to make amends.

7. Get personal. Get to know your people, learn about their families, their career goals, and truly care about them. I know a leader who when one of his team went above and beyond the call of duty, and put in extra hours, he would send a hand written note to the person’s spouse along with a gift certificate for a night out. He recognized the effect this extra work was having on his home life, and wanted to let the spouse know what a great job he was doing and how much he appreciated her support. While that may not be appropriate for everyone, it’s an example of showing your people you care about their personal lives, not just public ministry. Don’t let your team get carried away and miss out on important family events – let them know that family always comes first.

8. Set a good example. Be motivated, enthused, energized, and passionate about your own work and the work of the team.

9. Encourage camaraderie during work hours. Bring in a pizza now and then, go out to lunch, and celebrate milestones. Notice I said during work hours. While it’s OK if the team wants to go out together after a day at the church, or get together on their own time, I don’t believe a leader should intrude on people’s own time in the name of teambuilding.

10. Pay people for what they are worth. Yes, compensation is important, but I’ve listed it last. While pay is not a motivator, it can be a de-motivator if people feel they are underpaid. Do everything you can as a leader to fight for well deserved merit increases, promotions, and bonuses. Of all the entities in the world, Christians and Churches should pay best because they genuinely care about people.

[from Great Leadership by Dan McCarthy]
Posted by Don G. Brock at 11:10 AM No comments: Links to this post