The United Methodist Church recently launched its initiative to plant 400 new churches in the next four years with an initial gift from a Christian businesswoman.

Mary Watson, the wife of a former pastor, pledged $400,000 to the 400 Fund campaign to develop new congregations outside of the United States, according to UMC’s Global Ministries, the international mission agency of the UMC.

"I am excited by the thought of 400 new churches and what God can do with 400 new churches," said Watson, who along with her husband, the Rev. Ralph Watson, have been involved in mission fields around the world, especially in Russia, Estonia and Brazil.

She said her earliest memory of Methodist worship was under a brush arbor where her grandmother was raising money to build a church in Hannatown, a community in Decatur County, Georgia, named after her paternal family.

Starting new churches “is part of what God wants us to do in the world … We are to be God’s hands,” said the pastor’s wife from Atlanta to the directors of the General Board of Global Ministries during their Oct. 13-17 meeting.

Watson was able to make the generous donation because of her successful career in the nursing home industry. Her husband, the Rev. Watson, works for the World Evangelism Institute.

Being a Christian helped her “to realize that everything we have is God’s, everything – our money, our talents – everything is entrusted to us for the sake of doing things for God,” Watson said.

But the successful Christian businesswoman doesn’t want the giving to end with her. Watson urged other United Methodists to also donate to the 400 Fund, calling on children to join in and donate even pennies.

One hundred percent of every gift will go toward starting new churches.

Global Ministries, in addition to its goal of 400 new overseas congregations, also aims to start 650 new congregations in the United States.

If you have seven or eight "joy suckers" in a small- to medium-size congregation, it can cause the fellowship to become dysfunctional as well. So, how do you deal with the "tough stuff" that can make the strongest pastor flinch?

a) You attempt to understand what is the cause of the negative spirit — why do they act the way they do?
b) You consider their family situation.
c) You gauge their level of spirituality.
d) You monitor their influence in your church (Is there a big family connection?).
e) Have you done all you can to talk through the concern with that person?
f) Do you pray for them?
g) Do they have a history of this kind of behavior?
h) What will it cost you to "confront" them?
i) Does leadership understand your challenge?
j) Is the contention severe enough that it renders your ministry ineffective? 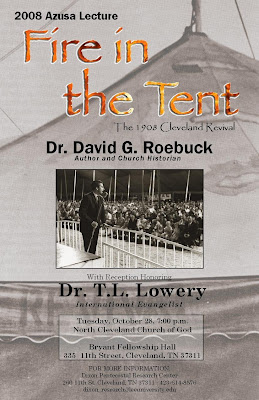 On Tuesday, October 28, Dr. David Roebuck will be presenting “Fire in the Tent: The 1908 Cleveland Revival” as the Third Annual Azusa Lecture.

Following the lecture, the Dixon Pentecostal Research Center and the Center for Spiritual Renewal will present the Spirit of Azusa Award to Dr. T. L. Lowery for his many years as an evangelist.

The event will be at the North Cleveland Church of God (Cleveland, Tennessee) Bryant Fellowship Hall at 7:00 p.m. The pubkic is invited.
Posted by Don G. Brock at 7:36 PM No comments: 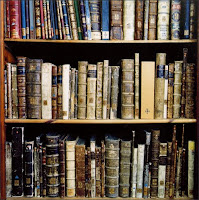 It's like CliffsNotes for Christian books, 8-10 page summaries to help you to easily gain wisdom from some of the brightest Christian thinkers.

Another way to say it is Solomon Summaries is like having an executive assistant read the entire book then write you an 8-10 page summary of the book's key points and concepts -- it's like having your own personal assistant save you time and help you quickly glean the wisdom of top Christian thinkers, pastors and scholars.

There's no charge until Dec 1.